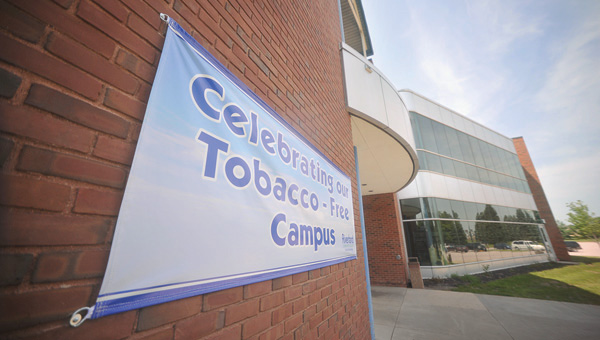 There’s a new rule at Riverland Community College: Smoking is not allowed.

A tobacco ban took effect on July 1 on all Riverland properties, the result of about three months worth of work by a Riverland committee after the Minnesota State Colleges and Universities Board of Trustees approved a resolution encouraging MnSCU colleges to address tobacco use.

“The rationale for the policy is to facilitate a healthier, cleaner and safer campus environment,” wrote Riverland President Terry Leas in an email to Riverland staff on May 7. Leas wasn’t immediately available for comment.

The MnSCU Board of Trustees wanted colleges to educate employees and students about tobacco use dangers, provide information about quitting smoking and further restrict tobacco use.

A tobacco-free campus task force, led by public relations head James Douglass, sent surveys to employees and students, and held forums and met with the student senate. Douglass wasn’t immediately available for comment and a message on his voice mail indicated he was on vacation.

Riverland officials posted signs around the Austin, Albert Lea and Owatonna campuses earlier this week, which were paid for with funds from the Statewide Health Improvement Program, a three-year program under the state Department of Health.

Though Riverland officials may have banned tobacco use on Riverland Community College property (except in your car), do students and staff support the new policy?

Out of 347 Riverland students and employees, 203 students answered it was very important or somewhat important that Riverland adopt a tobacco-free campus policy in a survey sent out to Riverland campuses this spring. In addition, 195 respondents said they’ve never smoked before.

“I love it,” said Yesenia Mendoza, Riverland adviser about the new policy. “I don’t like to breathe unclean air.”

She wasn’t the only one. There were 154 respondents who said secondhand smoke on campus was a concern or annoyance. In addition, 99 people said they were sensitive or allergenic to secondhand smoke.

“Chewing’s fine, because it doesn’t bother anybody,” said Preston Higby, Riverland sophomore. Higby said he doesn’t smoke and doesn’t like being around smokers.

That doesn’t mean the ban is universally loved. Of the respondents, 94 said they smoked cigarettes at least once a day, and 10 respondents use chewing tobacco. In addition, 83 respondents thought a tobacco-free campus policy was somewhat or very unimportant.

Not everyone is pleased with the new smoking ban.

“I don’t like it,” said Jordan Wylde, Riverland junior. “It’s not good. I am not happy about that.”

Wylde was strongly against the ban when he first heard about it, as he is a smoker. He works in Riverland’s theater department and stays at the Austin East campus for up to 12 hours a day this summer.

“I saw the (stupid) signs, the stickers that they slapped up on the door (next to the main entrance),” he said. “I sat up on the door and smoked like three cigarettes.”

“Why should I have to walk the better of 200 feet just so I can have a cigarette break?” he added.