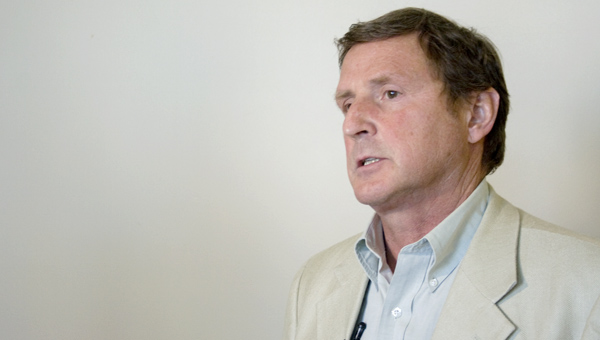 “Public trust is very important to our society, our way of life in this country,” Wellmann said, noting that the crimes Norman was convicted of involved a violation of public trust.

Under Wellmann’s order, Norman will not be allowed to obtain employment or act in a nonemployment capacity that requires him to be a fiduciary for any other person. He was ordered to serve 100 hours of Sentence to Service or community work service and must also obtain a mental health evaluation.

In the hallway after the sentencing, Norman said he was disappointed in the sentence and noted that he “can’t seem to catch a break.”

The convictions involved charging $2,300 of personal purchases during his first few months as city manager. He said he thought the issue could have been cleared up with a simple explanation and noted that the Albert Lea City Council also asked that the charges be dropped.

Wellmann ultimately let Norman choose his own sentence — 45 days in jail, with the possibility of getting out after 30 days with good time, or 90 days of electronic home monitoring at his own expense. Prosecuting Attorney Brenda Miller of the Waseca County Attorney’s Office, who has been handling the case, pushed for jail time.

Norman, making a brief explanation that he would like to try to keep his marriage together, ultimately chose the home monitoring. He has one week to get the monitoring in place.

If he gets a job in a formal 9-to-5 setting, he will be allowed to be released to go to work.

In court Thursday, Miller argued that she had concerns about whether Norman is accepting responsibility for his actions.

“I don’t think at this point he’s actually accepted he broke the law, that he did wrong,” Miller said.

“The man sitting next to me has accepted responsibility,” Rockow said.

She said he has had a complete “financial breakdown” and is attempting everything he can do to hold his family together as a unit.

“He’s humiliated himself,” she said.

Norman said he understands he was a public figure and that he was being held to a higher standard.

“I do understand I’m guilty,” he said. “I take full responsibility.”

Norman said his options are “severely limited” about whether he will be able to spend any time in the public field again, noting that working in the public sector has been a great source of pride for him.

“I feel terrible about what this has cost the community,” he said, apologizing to the community and the City Council. He said the case has been a severe blow to his family, and it has been difficult holding his family together.

He asked for the opportunity to start rebuilding his life. He mentioned the possibility of consulting work.

Rockow argued that Norman was not a public safety risk and that other people who are convicted of stealing $2,000 in Freeborn County would never be sentenced to jail time.

She argued that people can move forward from these types of situations in one of two ways: They can let these events define them or they can accept responsibility and say this doesn’t have to define them.

“Limiting his employment and placing him in jail does define him,” Rockow said.

She brought up the option of electronic home monitoring.

Wellmann did not impose a fine, surcharge or restitution on Norman but did impose a long list of other typical felony conditions including requirements of obeying all laws, reporting to his agent, notifying his agent of any changes in address or employment, obtaining permission before leaving the state, notifying his agent if he’s arrested and having no controlled substances or alcohol.

Norman will be ordered to submit to random testing to verify this no use.

He will also not be allowed to own a firearm and must supply a DNA sample.

Wellmann did note the possibility of Norman’s convictions being able to be reduced to a gross misdemeanor or misdemeanor if he followed the terms of probation.