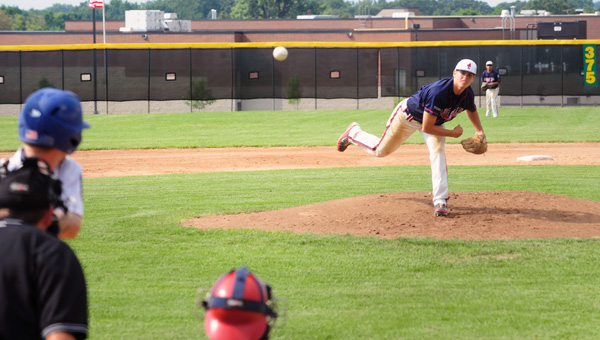 EDEN PRAIRIE — Albert Lea American Legion Post 56 head coach Jack Kortan gathered his team around him for one last time after Saturday’s Minnesota Legion State Tournament game. The Tigers lost 3 to 2 in nine innings against Hopkins post 320, but they fought until the very last out of the season.

It was the last time these 14 players and four coaches will probably ever take the baseball diamond together again, and the Tigers wanted to make it interesting late in the game. In the top of the ninth inning, Albert Lea loaded the bases, with one out, down a run to the Flyers but couldn’t manage to drive in the game-tying run.

“We had some good at-bats there at the end — it’s just a tough way to lose,” Kortan said. “We had our chances.”

With one out in the ninth, Cody Haaland led of the Tiger’s attack with a single to center field. J.T. Bellrichard reached base safely on an infield hit to third base, the Hopkins third baseman couldn’t spot the ball over to first in time for the out. With the tying run at second base and the potential game winning run at first base Tyler Woodside hit a bloop single that fell past the pitcher’s outstretched arms for a hit. 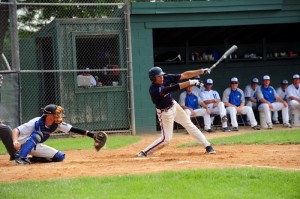 J.T. Bellrichard turns on a ball from Hopkins pitcher Jay Homan. Bellrichard finished 1-for-3 on the day while drawing a walk.

The attack was halted after Makael Lunning struck out at the dish, and Dylan See-Rockers grounded out to the second baseman.

“We played well at the end, we had our ups and downs all season long, but at the end we really played well,” Kortan said. “Even today we lost 3-2 to a top-notch team, and we had our chances to win.”

Cole Sorenson saved his best pitching performance of the season for Post 56’s last outing. He pitched a complete nine innings that looked strong from the beginning to end.

Hopkins was able to tag Sorenson for two runs early in the second and third inning but he was able to recover in the innings and halt the damage at one run per inning.

In the second inning, Sorenson gave up a lead-off single to Bill Gregg. He then struck out Jack Hamilton before allowing an infield single to Tanner Holmquist. With runners at first and second base, Hopkins Matt Sinderson delivered the games opening run with an RBI single to left field.

Sorenson buckled down in the inning and was able to strike out the following batter and get Jacob Price to ground out, leaving two ducks stranded on the pond.

“The first couple innings they got a couple, but two to five runs should be enough the way we were swinging the bats,” Sorenson said. “I was trying to work the curveball and keep them off balance. I was able to spot it at any pitch in any count.”

Hopkins threatened to break the game open again in the third inning. Two opening singles by the Flyers allowed Kyle Dalton to deliver an RBI sacrifice fly ball to the outfield, increasing their lead to 2-0. Sorenson dug deep yet again and delivered the final two outs of the inning with runners stranded on first and second base. 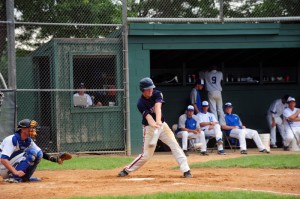 Tyler Woodside takes a swing at a ball low in the zone. Woodside went 2-for-4 for the Tigers including a run scored.

Hopkins was looking to add a few security runs late in the seventh inning with runners on the corners. Albert Lea catcher Connor Kortan was able to pull in a pitch from Sorenson as the Flyers attempted a suicide squeeze and throw the runner out at third base on the misstep. During the rundown, Hopkins Andy Wicklund rounded the bags to third base, where he sat until he was sent home off of Kyle Dalton’s RBI single up the middle.

“That was the best game Cole’s thrown in Legion ball,” Jack Kortan said. “He picked a good time, we just didn’t give him enough run support.”

Albert Lea made the game interesting in the eighth inning when Bellrichard drew the opening walk, followed by Woodside’s single to left field. See-Rockers pulled through with an RBI single down the third base line to score the Tigers first run. With runners on the corners, Ethan Abben delivered an RBI sacrifice hit to the second baseman.

Prior to the eighth inning, Hopkins starting pitcher Jay Homan held Albert Lea to just three hits through seven innings. Homan was pulled from the game in favor of Aaron Gingerich after he allowed the Tiger’s first run.

Albert Lea’s run at the 16-team Minnesota Legion State Tournament came to an end with their second loss in the double elimination format. They won their opening game against Lakeville North 5-2 on Friday morning before being downed by Eden Prairie 13-1 at night.

“It has been fun, it’s an honor to be here,” Kortan said. “They treat you like you’re a championship team.”

Post 56 advanced to the state tournament for the first time in over 30 years after winning the District 1 tournament as the fifth seed. They end the 2011 campaign with an overall record of 19 wins and 16 losses.

Sorenson said he will need some time to decide on his future.

“Right now I’m not really sure,” Sorenson said. “I have to talk it over with the other guys, and we’ll see whats going on.”

Whatever the case may be, the 2011 American Legion team has raised the bar for future Albert Lea baseball teams.