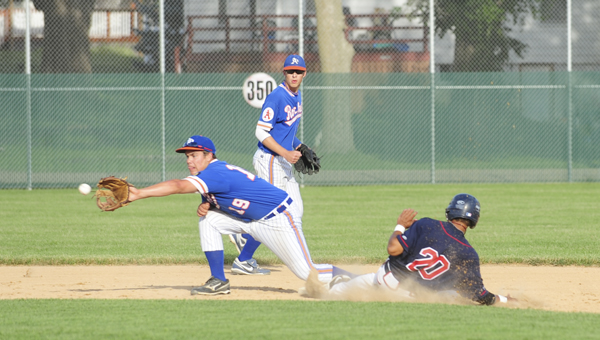 Albert Lea American Legion Post 56 held an early lead through five innings against the Rochester A’s on Wednesday night, but couldn’t contain them in the final two innings, falling by a score of 5-2 at Hayek Field.

Rochester (17-11, 9-5 division) began the nights scoring in the top of the second when catcher Nick Merges laced an RBI single to left field, with runners on the corners, scoring Mitch Gade from third base.

Post 56 (12-12, 7-6 division) was able to answer in the bottom half of the inning. J.T. Bellrichard reached base on a single to right-center field. He advanced to second on a balk by A’s pitcher John Meyer, before being sent to third base on a ground out by Dylan See-Rockers.

From there, Makael Lunning powered an RBI single down the left field line, and was then knocked in for a run by Ethan Abben. Abben drove the ball to deep center, just short of the fence, for a RBI double. 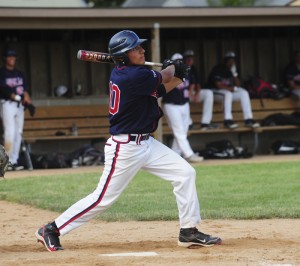 J.T. Bellrichard watches the ball after he connects on a single to right field, which fell between two outfielders. -- Garrett Wampler/Albert Lea Tribune

Albert Lea pitcher Tyler Woodside was able to limit the A’s to seven batters during the third and the fourth innings.

In the sixth inning, Gade again reached base on a single to right field before third baseman Matt Sturchio ripped an RBI double to right-center. Before Woodside could stop the bleeding, he gave up another RBI single to Merges.

Cody Haaland replaced Woodside on the mound to try and bring an end to the sixth inning. He walked the first batter he faced and then gave up an RBI sacrifice fly to Josh Benson.

“We didn’t play very good defensively, there were balls I thought that should have been caught,” Post 56 head coach Jack Kortan said. “They were tough catches but I’ve seem them catching before.”

Rochester added to their lead in the seventh inning when Jordan Jasik crushed a Haaland ball that hung high in the zone. The play resulted in a RBI triple for Jasik. Sturchio capped the games scoring in the with an RBI single to left field. 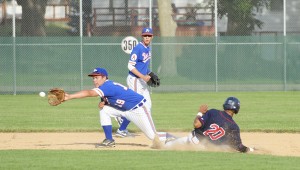 Makael Lunning beats out a throw to steal second base Wednesday night against the Rochester A's. -- Garrett Wampler/Albert Lea Tribune

Kortan wasn’t satisfied after the game with all of the missed opportunities at the plate, either.

“We had the bases loaded and nobody out and we didn’t score,” Kortan said. “We didn’t put the ball in play, we had the players I wanted up there and they just didn’t get it done.”

In the first inning, Rochester’s pitcher John Meyer walked the games first two batters before hitting Cole Sorenson with a pitch. With the bases loaded and no outs, post 56 grounded into a fielder’s choice, struck out and grounded out to end the inning.

Albert Lea also stranded runners on base in the bottom of the second with one out, but failed to drive home any runs.

In a battle of potential fourth-seeds, Albert Lea faltered for the second time this season. During their first meeting Albert Lea lost 5-4 on June 29.

The Albert Lea American Legion squad will finish the season against Waseca, a double header against the Rochester Patriots and another twin-bill against Onalaska, Wisc., before hosting district play beginning on Thursday, July 21.