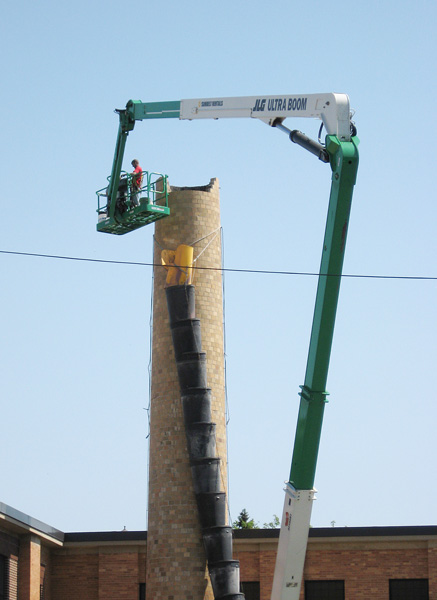 This photo, taken in June, shows work being done to Hawthorne Elementary School’s smokestack. Director of Facilities Eric Hudspith predicted all masonry work on area schools will be completed by the end of July. -- Ed Shannon/Albert Lea Tribune

Albert Lea Area Schools are getting some upgrades this summer to prepare for a mechanical systems upgrade scheduled for the next three years.

Eric Hudspith, director of facilities and transportation for the district, said all the upgrades will be in preparation for an almost $15 million project that will start in the summer of 2012 and continue the next two summers after that.

The project will replace or restore heating and ventilation systems in six of the district’s buildings. The buildings in need of upgrades include Hawthorne, Sibley, Halverson and Lakeview elementaries, Brookside Education Center and Southwest Middle School.

Currently the district is working with McKinstry Essention in making the schools more energy efficient, before starting the upgrades to the mechanical systems. Director of Finance Lori Volz told the school board in May that the energy upgrades project is unique in that the money the district saves in energy costs will go toward the debt repayment.

“We’re doing lighting retrofits in all the buildings,” Hudspith said.

Other energy upgrades include installing software on all the district’s computers so that they automatically shutdown after a period of non-use. This will help the district save money if staff or students are forgetting to shut down computers before leaving the school each day or for holiday breaks.

Another energy upgrade includes changing the heating method for some of the dishwashers in the district. Instead of electric hot water heaters, the dishwashers will receive natural gas to heat water. Vending machines in the schools will also be fitted with a VendingMiser. A VendingMiser uses a motion detector to see if the surrounding area is vacant and can power down the machine itself to save energy costs.

Other work to prepare for the upgrades includes asbestos abatement in Brookside and replacing insulation on pipes. In 2012, Hawthorne and Brookside’s boilers will be replaced. The four other schools will have their boilers rebuilt, which will make them like new and be cheaper than replacing them.

“When we can rebuild and reuse, we will,” Hudspith said.

The boilers have lasted much longer than they are expected to, which Hudspith attributes to a great maintenance staff in the district. Hudspith said the district will get materials locally.

“We want to keep the work local as much as possible,” Hudspith said.

The district received a low-interest loan for more than $10 million from the U.S. Department of Education through its Qualified Zone Academy Bonds program. With the interest savings the district will save more than $3.5 million. That will mean around a 3 percent increase on the levy’s bottom line instead of 7 percent like she had earlier predicted.