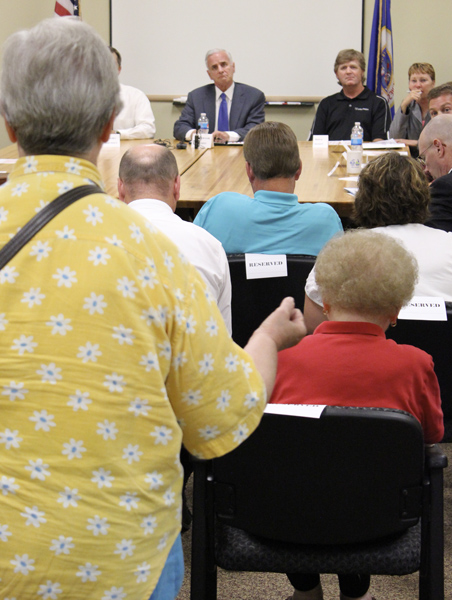 A day after Gov. Mark Dayton left Albert Lea, he gave a counteroffer to Republicans that he felt would bring a deal and reopen state government. Did what Albert Leans said have an impact?

The governor came to Albert Lea on Wednesday afternoon after visiting Rochester that morning and St. Cloud the day before.

Kehr said the meeting in Albert Lea was with business leaders and was delivered in a “factual, civil manner,” contrasting with some public outcry the governor experienced at town hall forums in the other two cities.

The staff members with the governor on Wednesday told the Albert Lea Tribune that their work day wasn’t done after the Albert Lea meeting. The governor had another meeting that night to comb over the feedback he had received from Minnesotans.

Many people at the Albert Lea meeting urged him to find a way to reopen the state government.

“It is pushing the problem off to someone else, pushing it to next year or the future.”

He said he understands that Dayton saw the need to reopen state government and that was the message he heard in Albert Lea. But Dorman added that the Legislature needs to make the hard decisions in the coming session that provides a long-term fix to the annual shortfall.

Among the things Dorman calls for a replacement for the Job Opportunity Building Zone program, a tax-incentive program nicknamed JOBZ and geared for Greater Minnesota.

He said state legislators need to recognize that not all parts of the state have the same needs.

As for the deal struck Thursday night in St. Paul, Dorman said it does indeed include taxes. Delayed state payments and reduction in services result in increases in local property taxes.

Kim Nelson, the director of The Children’s Center, said she is concerned the budget deal will place more hardship on low-income families needing child care.

She said the state child care assistance has been frozen for about five years or so and the new budget deal could still have a 5 percent cut to the assistance. She is hoping it will not.

“If that’s going to be lowered when our expenses go higher, the parents are going to have to make that up,” Nelson said. “It would kick them when they are down.”

She said the program is an economic development issue. Skilled workers need quality child care or they will go elsewhere. She noted how she gets tours from employers recruiting talent.

“If you don’t have the whole package in tact, you’ve got a problem,” Nelson said.

With a state reopening, however, she is glad the federal assistance that flows through the state offices will resume. That includes the U.S. Department of Agriculture’s food program funding.