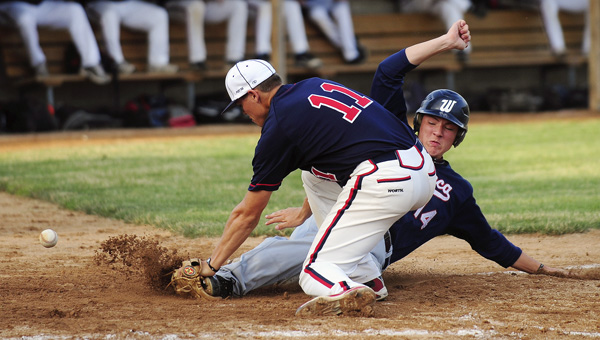 Cole Sorenson struggled through three innings on the mound Thursday but made up for it with his bat.

After pitching a 1-2-3 top of the first inning, Sorenson labored in the second. Waseca notched one run on one hit in the inning but were running around the base paths on two passed balls and scored on a wild pitch.

In the third inning, Sorenson got Waseca’s first two batters out before walking two and allowing a hit to load the bases. The right-hander then walked in a run and allowed another to score off a second wild pitch. Waseca tried to sneak in a second run off the errant throw but Zach Hiller was called out at home plate. Waseca took a 3-2 lead into the bottom of the third inning.

After allowing two runs in the top of the third, Sorenson got both back on one swing in the bottom of the inning. With Cody Haaland on first base, Sorenson hit a 330-foot home run over the left-field fence to pull the Tigers ahead for good 4-3. Ethan Abben singled five batters later to score Makael Lunning and extend the lead to 5-3.

After scoring three runs off starting pitcher Brandon Sutlief in the third, the Tigers scored five off reliever Jordan Steffens in the fourth.

Aaron Klatt opened the inning with a single to center field and stole second and third base during Houston Sharpe’s at bat. Sharpe walked, and Sorenson singled to score Klatt for his fourth RBI of the game before Lunning struck out for the first out.

With runners on first and second, Bellrichard hit a grounder to second shortstop John Mitchell, who instead of getting the routine out at first base tried for a fielder’s choice at second. Sorenson reached second base before the force out and all runners were safe loading the bases for Woodside. Woodside then singled to score Sharpe before the wheels fell off for the pitcher Steffens.

With the bases loaded and Jed Lokken at the plate, Steffens threw a wild pitch that advanced all the runners and scored Sorenson. Lokken hit a sacrifice fly to score Bellrichard, and Woodside moved from first to third on a throwing error by the right fielder. With Abben up to bat, Steffens threw another wild pitch and allowed Woodside to score before the second baseman grounded out to end the inning.

The Tigers scored twice more in the bottom of the sixth to make the final 12-3.

The Tigers found steady pitching after Sorenson was pulled from the mound after three innings. Jon Mittag struck out four batters through his first three innings of relief and retired seven batters in a row before running into trouble in the seventh.

Given a nine-run cushion, Mittag walked the first two batters of the seventh and allowed a single to load the bases with no outs. Mittag then struck out two batters and got Nate Draheim to ground out to end the game.

The Tigers’ regular catcher, Connor Kortan, was given a rare game off from behind the plate after catching Tuesday for the Tri-City Redlegs and Wednesday for the Post 56 team. Tigers coach Jack Kortan said he wanted to keep Connor fresh for the team’s doubleheader today against Rochester John Marshall. Kortan was replaced at catcher by Bellrichard and played third base.

Eight of the Tigers’ 11 batters recorded a hit Thursday and all reached base at least once. Abben finished 2-for-3 with an RBI and reached base four times in five plate appearances. Woodside also recorded two hits, along with Sorenson.

The Tigers begin a doubleheader at 4 p.m. today against Rochester John Marshall in Rochester.