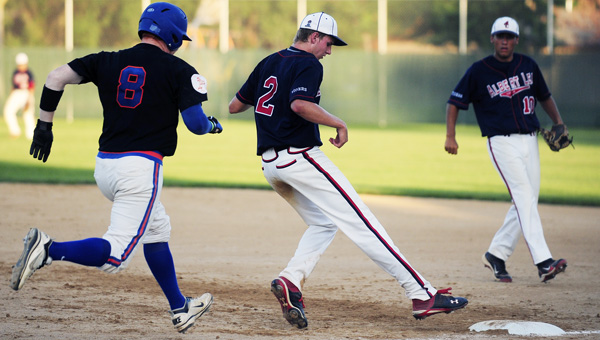 Albert Lea pitcher Aaron Klatt steps on first base Tuesday during a 13-0 win over the Rochester A’s. Klatt went 5-for-5 and struck out 14 batters. — Andrew Dyrdal

Aaron Klatt allowed Rochester’s first three batters to reach base Tuesday. Then he struck out seven of the next 12.

Klatt fanned a total of 14 batters in eight innings and went 5-for-5 at the plate as the Albert Lea American Legion Post 56 baseball team beat the Rochester A’s 13-0 in the first round of the District 1 Tournament at Hayek Field.

Seeded fifth and playing the No. 4-seeded A’s, the Tigers received an opening-round home game because they’re hosting the district tournament beginning Thursday. Despite the home-field advantage, the Tigers played as the away team and batted during the top of each inning against a team they lost to twice already this season. Klatt made sure there wasn’t a third.

After loading the bases on an error, double and walk, Klatt struck out the next two A’s batters and got a third to ground out to second base. Klatt then found his grove, dropping curveballs in for called third strikes, and struck out four of the next five batters and seven of the next 12. Meanwhile, Klatt drove in the Tigers’ first run — a single in the third that scored Ethan Abben.

On a steamy night at Hayek Field — it was 91 degrees during at opening pitch — Klatt said his arm felt great.

“I had confidence the whole night,” he said. “I went up there, snapped it off and my defensive was great behind me.”

The same couldn’t be said for the A’s defense. Rochester committed seven errors, many on errant throws that didn’t need to be made, and the Tigers took advantage.

Leading 4-0 with two outs in the fifth inning, Cody Haaland was caught in a run down between first and second base. While Haaland kept the A’s right side of the infield busy, Cole Sorenson moved from second to third and scampered home while a throw went to the plate. The A’s catcher placed a tag on Sorenson before he slid across home plate but the ball was knocked out of his glove and Sorenson was called safe.

Tyler Woodside singled during the Tigers’ next at bat, and during Makael Lunning’s at bat, Woodside, too, was caught between first and second. Haaland was safe at third and scored on a throwing error before Lunning struck out to end the inning.

“His job is to get into a hot box and stay in it until we score the guy from third,” Kortan said of the baserunner. “It worked both times.”

The Tigers scored five runs in the fifth, two in the eighth and three in the ninth with two outs to build a 13-0 lead, and Jon Mittag pitched a 1-2-3 bottom of the ninth for the save.

Fortunes turned for the Tigers in their third game against the A’s this season. In their last match up, the Tigers loaded the bases in the first with no outs and didn’t score a run. This time the A’s did the same and the Tigers cruised into the section round of the district tournament.

“That was the story of the game,” Kortan said. “Aaron pitched out of trouble and did a heck of a job.”

The Tigers roughed up Rochester’s John Meyer, a Lion’s All-Star, who beat the Tigers once this season. Meyer allowed six runs on six hits before exiting after 4 2/3 innings.

“We stayed on the ball longer, hit the ball where it was pitched and made good contact,” Kortan said. “We were ready to hit tonight and other nights (Meyer) had better stuff.”

Klatt notched five of the Tigers’ 15 hits and had two RBIs. Sorenson went 2-for-3 with two doubles and three RBIs and Haaland went 2-for-6 with two RBIs. Tyler Woodside had two hits.

The Tigers play again at 7 p.m. Thursday against Winona in the double-elimination semifinals of the district tournament.