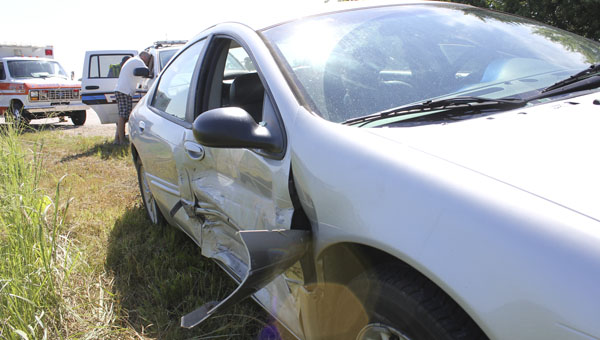 Dents indicate where a Chrysler Concorde was smacked in the right side on Friday at the junction of Freeborn County roads 46 and 6, immediately south of Alden. -- Tim Engstrom/Albert Lea Tribune

ALDEN —A T-bone collision at the junction of Freeborn County roads 46 and 6 on Friday morning immediately south of Alden resulted in a man being injured.

The man was extricated from a silver Chrysler Concorde LXI and taken to Mayo Clinic Health System in Albert Lea via ambulance. His condition is unknown at this time. The driver of the other car, Stephanie Hallman, was uninjured. 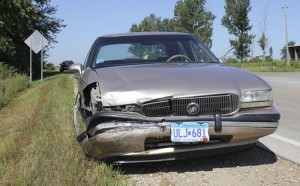 Stephanie Hallman's Buick LeSabre sits by the side of Freeborn County Road 46 after it collided with a Chrysler on Friday morning. -- Tim Engstrom/Albert Lea Tribune

The junction is a T-intersection, with 6 ending at 46. County 6 for this stretch between Alden and County 46 also goes by the name 645th Avenue. According to Freeborn County sheriff’s deputy Kurt Freitag, Hallman, driving a beige Buick LeSabre, was at the stop sign looking for oncoming traffic on County 46.

She waited as a westbound semi approached on 46 then pulled into the turning lane for right turns, Freitag said. As it turned, Hallman pulled out intending to go east toward Albert Lea. However, the Buick appeared, most likely shielded from sight behind the semi. The result was the right, front corner of the Chrysler crashed into the passenger door of the Buick.

The crash was reported at 10:17 a.m. There were no passengers.

Sheriff’s deputies still were investigating the crash Friday and further details could materialize. Watch the Tribune for updates.