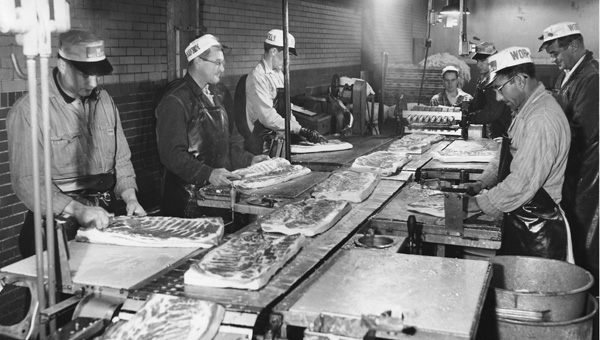 This photo shows Wilson Co. employees trimming pork. No date provided. This type of industry has provided a way of life for many in the community. -- Photo courtesy Freeborn County Historical Museum

Editor’s note: This is the second in a three-part series looking back on the Farmland Foods fire of July 8, 2001, in Albert Lea.

When Farmland Foods burned in 2001, one of the immediate effects on the community was a loss of hundreds of jobs.

Now, 10 years later, however, Albert Lea has recouped these jobs and diversified its job market, according to local business leaders.

“One of the lessons we learned from the fire is that job diversity, industrial diversity, is important,” said Randy Kehr, executive director of the Albert Lea-Freeborn County Chamber of Commerce. The community’s employees have also improved their job mobility.

Employees that had been working in the Farmland Foods plant for 20 to 30 years found new jobs in different markets and some even turned to using their talents to lift up nonprofit organizations. Some continued in the meatpacking industry at different companies.

In the height of its operation, however, Farmland — which was under several different names through the years — was the largest employer in the city with more than 1,300 jobs.

Albert Lea Economic Development Agency Executive Director Dan Dorman said he often hears people say the community hasn’t grown since the fire, but the reality is that it has.

“There were 500 jobs that needed to be replaced in the community,” he said. “Sure we haven’t added 500 from where we were at before the fire in 2001, but we were able to add those jobs back that were lost.”

Many of those came under the state-initiated Jobs Opportunity Building Zones program that was put in place in 2003, and which has since helped create more than 650 jobs in the community, according to a JOBZ audit conducted in 2010.

Of those jobs, Albert Lea Select Foods, a pork processing plant, has created at least 500 employees, and there have been numerous other operations to see increases of 10 to 30 employees.

According to the audit, there has been $47 million in capital investment made in the community through the program.

According to the most recent available job numbers, Mayo Clinic Health System in Albert Lea remains the largest employer in the city; however, also in the top 10 largest employers now is Select Foods, Cargill, Lou-Rich, Walmart and two nursing homes.

Dorman said there is a large skilled work force in Albert Lea, but there are more people who work outside of the city now than there were in 2001.

“Most of our businesses or job opportunities stem out of that,” he said.

Rasmussen also noted that many of the job losses that the city has incurred since the Farmland fire — for example at Streater — have come because of increased automation.