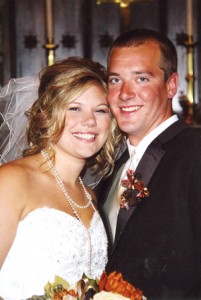 Parents of the bride are Stacia and Mark Schumaker of Glenville and Fred English of Georgia. Grandparents are Ross and Ruth Ann Severtson of Hayward and Wanda Easterling of Georgia.

Parents of the groom are Brian and Beckie Blecker of Albert Lea. Grandparents are Glen and Donna Blecker of Florida, Kathie and Jim Leuring, Paula Herbig, Kirn and Don Hathaway of Illinois.

The bride was escorted down the aisle by her grandfather, Ross Severtson.

Soloist at the ceremony was Todd Utpadel of Albert Lea.

The bride and groom reside in Albert Lea.

A reception and dance were held at the American Legion in Albert Lea.