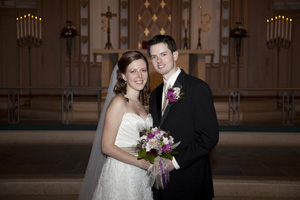 Parents of the bride are Dale and Charlotte Elvebak, of Albert Lea.

Parents of the groom are James and Suzanne Keuseman, of Willmar.

Grandparents of the bride are Junior and Harriet Korn, of Walters, Violet Thorland, of Bloomington, and Rodney Elvebak, of Kiester. Grandmother of the groom is Ellen Keuseman, of Willmar.

Flower girl was Valentina Gorder, friend of the couple, daughter of Bill and Justine Gorder, of Cincinnati, Ohio.

Best man was Matthew Johnson, friend of the groom, of Lino Lakes.

Ushers were Jeremy Korn, cousin of the bride, of Kiester, and Aaron Willey, friend of the groom, of Mankato.

Ring bearer was Brooks Woelfel, friend of the couple, son of Matt and Kayla Woelfel, of Rochester.

The soloist was Curt Korn, uncle of the bride, of Kiester.

Robert Tewes was the organist and piano soloist.

Readers were Rachel Tuil, of Arlington, Va., and Nicole Radotich, of Eagan, both friends of the bride.

The bride’s personal attendants were Jean Heise, of Clearwater, and Kelli Ritter, of St. Joseph, both friends of the bride.

The bride’s aunts, Lorie Korn, of Kiester, and Carla Hansen, of Burnsville, were hostesses.

John Degner, friend of the bride was videographer.

The bride is a graduate of Albert Lea High School and Gustavus Adolphus College, St. Peter. She is currently attending Mayo School of Medicine, Rochester.

The groom is a graduate of Willmar High School and Minnesota State University, Mankato. He is an engineer for IBM Corporation, Rochester.

After a wedding trip to Napa Valley, Calif., the couple resides in Rochester.