Jill is the daughter of Don and Donna Skimland. 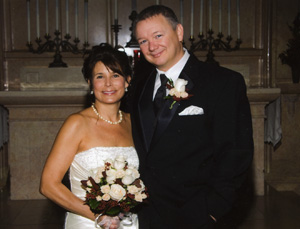 Curt is the son of Harold and Lee Clarambeau, of Fort Pierre, S.D., and the late Audrey and Darrell Gilman, of Oacoma, S.D.

Scripture reader was Diane Simon and Kevin Weitzel, both of Albert Lea.

Usher and candle lighter was Adam Larson, of Mankato.

Dinner was held at Crescendo followed by a reception at the American Legion.

The bride is employed at Freeborn County Department of Human Services as a case manager.

The groom is the owner of Curt’s Pharmacy and New Richland Drug and Pharmacy.

After a wedding trip to San Francisco, the couple resides in Albert Lea.