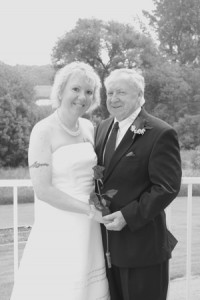 Brenda Swalve and Edward Hubbard, of Albert Lea, were married at 11 a.m. June 18, 2011, at The Village Coop in Albert Lea. Bill Sturtz performed the double-ring ceremony.

Parents of the groom are the late John and Mary Hubbard of Wells.

Maid of honor was Carrie Hubbard, daughter of the groom, of Fargo, N.D. Bridesmaid was JoAnn Bowman, friend of the couple, of Albert Lea.

Best man was Brian Eyler, future son-in-law of the groom, of Moorhead.

Groomsman was Ron Stangeland, friend of the couple, of Albert Lea.

A reception is being planned at the couple’s home later this summer.

The bride is employed at Slifka Sales.

The groom is employed at Hubbard Agency.

A wedding trip is planned in September in the Black Hills in South Dakota.