Winning in the process 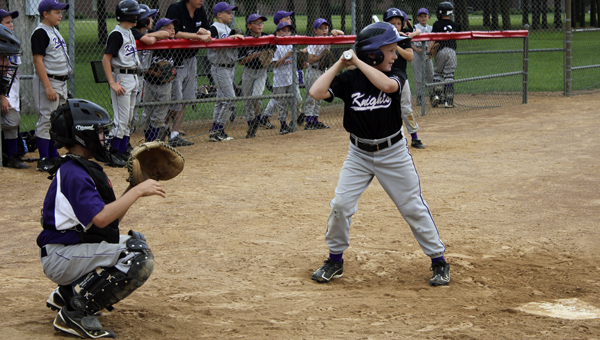 Knights players scrimmaged during media night, giving Sammy Withum, 8, a chance to get a hit off of his older brother Ben Withum, 11. Sammy ended up grounding out right back to his brother during the at-bat. -- Garrett Wampler/Albert Lea Tribune

On Wednesday night at Snyder Field, players and coaches from various Albert Lea Knights youth baseball teams gathered for a media day to celebrate a season which brought two state championships and one third-place finish to the growing program.

“I brought them T-shirts with a Vince Lombardi quote on it that read ‘Winning isn’t everything, but giving the effort to win is,’” 9AA head coach Brian Ball said. “That’s all we ever ask of them. Ten-year-old baseball isn’t about winning or losing but developing them as players.”

Although the basis of the Knights youth baseball program is to teach the fundamentals of the game to the youngsters, that doesn’t mean they can’t win a few games in the process.

The Knights 9AA team won seven consecutive games in the 10A 40-team field. They earned the No.1 seed after pool play, and then they beat Belle Plaine, Knights 10A and Parkway before beating Orono 4-1 in the championship game. In the seven games at the tournament, Albert Lea scored 55 runs, allowed only 12 runs and had 6 errors. They also hit .395 as a team.

“When this team plays like they can then nobody can stop them, “ Ball said. “They set themselves a goal, beared down and put the effort in.”

Eight-year-old Sammy Withum said he learned a lot about playing first base and his favorite part was winning the state championship.

Carter Simon pitched the final two innings in the Knights 9AA championship game. He said, “It was exciting when I got the last strike on the last batter to win the championship.” Simon also learned a lot about playing shortstop and pitching this year.

Knights 10AA won the state title by defeating Delano, 4-3, in the championship game. Albert Lea trailed 3-0 entering the bottom of the sixth but scored four runs in the comeback win. This past weekend they secured second in the Minnesota Sports Federation State Tournament, falling to St. Michael Albertville, 2-1.

“We played very mature, coming back in high-intensity games,” head coach John Ball said. “That helped out in the championship game when we were down 3-0, to come back. We never backed down.”

John Ball said his team played very well this year; they had four second-year players and five 11 year olds that made the age cut. He said their pitching was very good at the 10-year-old level and was dominate to the point that it kept them in games. The same squad had taken fourth at last year’s MBT tournament in the 10A section.

“It was really fun in all of our tournaments,” Knights 10AA shortstop Alex Ulve said. “Coach teaches us, which makes it fun.”

In 11AAA action, the Knights baseball team placed third in the MBT State Tournament in Eastview on July 8 to the 10. In pool play, the Knights beat Eagan, 11-6, fell to White Bear Lake 8-6 and downed the top-seeded Eastview 6-2.

When they advanced out of the pool, the Knights won two consecutive games but lost to the eventual state champion Minneapolis Millers 7-5. Albert Lea was able to recover from the loss to win the third-place game in a 7-5 decision over Lakeville North. The team finished the season with a 29-10 record.

“This is the first year we played in the AAA classification, which is the highest,” said Kelly Bordewick, Knights 11AAA head coach. “We weren’t sure how it was going to go, but it went well and the kids adapted to it well.”

Last year the team won the 10AA MBT state tournament which prompted them to move to the next level.

“Next year we’ll have three or four teams playing at the AAA level,” Bordewick said. “We focus hard on fundamentals and skill development. It’s important to us that they have fun and learn fundamental baseball.”

The Knights will begin looking at teams for next year on Saturday at tryouts. They will be able to get the kids started early while the weather is still nice.