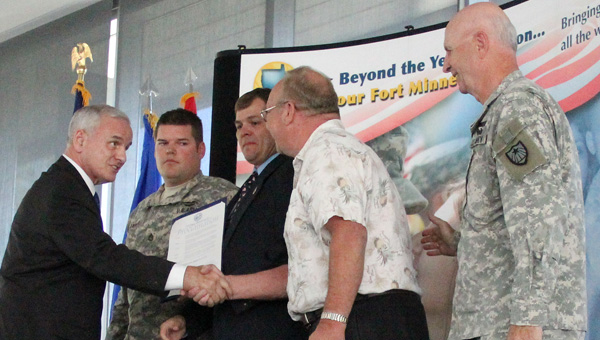 ROCHESTER — This is just the beginning — now the real work begins.

Albert Lea was named a Yellow Ribbon Community, along with Owatonna and the Winona region, at a ceremony Wednesday. Albert Lean John Severtson, one of the main organizers of the Beyond the Yellow Ribbon steering committee said he hopes military families in need start using the service.

“Everybody has worked hard to get to this point,” Severtson said. “Hopefully everyone keeps working hard.” 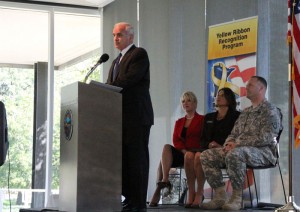 Gov. Mark Dayton speaks to a crowd of about 100 people at a Yellow Ribbon Recognition Program Wednesday at the Rochester Art Center.

“It was something we were going to continue to do anyway,” Barker said.

Before the communities were recognized Maj. Gen. Richard Nash and Gov. Mark Dayton spoke to the crowd of about 100 people. Nash said the volunteers and organizers will probably never know how vital their services are.

“This is hugely important,” Nash said.

Dayton spoke of the times he visited troops in Iraq and Afghanistan and of the dangers servicemen see when deployed. He said for the soldiers’ family back home life is not normal and that it’s the least Minnesotans can do to help.

“You’ve made a real commitment,” Dayton said. “You’re going to help save lives.”

Carlson said he appreciates the work Albert Lea had to do to become an official Yellow Ribbon Community, which included action plans and making committees.

“They’re not just handing these out — they want to get a good product back,” Carlson said.

Rasmussen said that collaboratively there was a lot of hard work to become an official Yellow Ribbon Community, but that it was worth it so people will know the community cares. 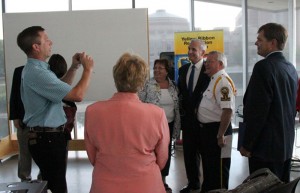 Albert Leans Judy and Mick Jaquette get their photo taken with Gov. Mark Dayton after a short program that named Albert Lea, Owatonna and the Winona region Yellow Ribbon Communities.

“Now we need to live the prophecy and meet the needs of servicemen and their families,” Rasmussen said.

Identifying families in need of help has been an issue so far for the group; Severtson said he hopes families who need help come forward to utilize services that are available. Murray said he was excited Albert Lea’s group was made official and that now the real work will begin to provide services for those who need help while family members are deployed.

“They know where to go now,” Murray said. “I think that says a lot about the community.”

Tammy Estes, the leader of the local Family Readiness Group, was also in attendance and said it’s nice to be recognized, but she hopes local residents understand the Yellow Ribbon Community is there to help families and servicemen of any branch of the military.

Betsy Singer, a local TV network anchor, was the host of the event and introduced each community before the proclamation was given out. She said the host community, Beyond the Yellow Ribbon Southeast Minnesota, has identified the ingredients for success. 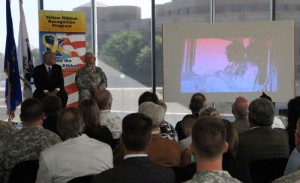 She then highlighted some of the things Albert Lea has done to show their support for military personnel and their families. These include how fast the steering committee formed, support of local law enforcement, and support of the school system, among others that helped the city become an official Yellow Ribbon Community.

“It’s been long overdue but the wait was absolutely worth it,” Carlson said.