All eyes on stage for Gatlin Brothers

For the first 45 minutes of Larry Gatlin & the Gatlin Brothers’ show Thursday night at the Freeborn County Fair, Gatlin did more talking than singing.

The crowd didn’t seem to mind, though, as Gatlin kept everyone in the Grandstand intrigued through jokes at audience members’ expense. 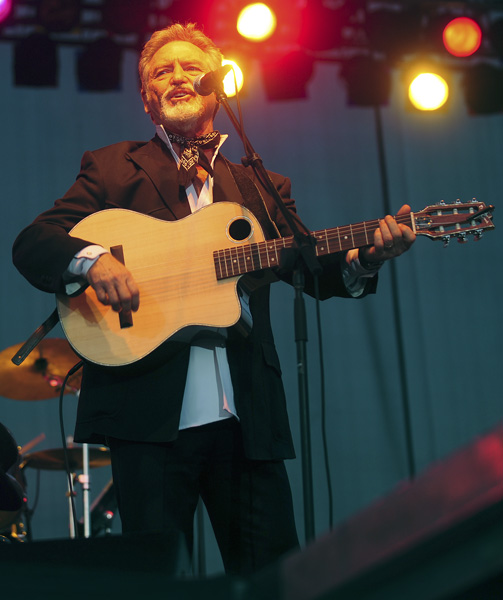 Larry Gatlin plays guitar and sings Thursday to “Houston (Means I’m One Day Closer to You)” at the Grandstand at the Freeborn County Fair. -- Andrew Dyrdal/Albert Lea Tribune

No subject was taboo, either, as Gatlin touched on politics, religion and mosquitoes as he intermitted each three-minute song with five minutes of dialogue.

“Was that a mosquito or a condor?” Gatlin asked the crowd as he swatted at his shirt. “I could ride that thing home (to Nashville).”

Gatlin, 63, had the audience on their feet when their set’s first note was played at 8:30 p.m. sharp. Gatlin and his brothers, Steve and Rudy, opened the concert by playing “America the Beautiful.” Gatlin said he sang the patriotic song in California and the audience didn’t know the words.

“It’s good to be back in America,” Gatlin said.

With the audience already upright, the band received a standing ovation before their second song was played.

The Gatlin brothers played “Night Time Magic” next followed by the No. 1 country single “Houston (Means I’m One Day Closer to You)” before Gatlin took audience participation ever further.

During the band’s fourth song, “I Don’t Want to Cry,” many audience members near the stage were taking photos with cameras and cell phones. Gatlin then halted the song and asked his brothers and the band to accompany him onto the catwalk for a photo shoot. Gatlin invited all members of the audience to the front to take pictures while he smiled, waved and posed.

After about two minutes pleasing quick-clicking fans, Gatlin returned to the music. A few audience members still lingered near the stage with their cameras so Gatlin again quit playing and invited anyone else who wanted to take photos back up toward the stage. 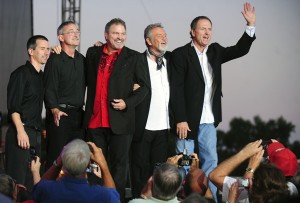 Larry Gatlin & the Gatlin Brothers, along with two members of their stage band, pose for photos Thursday during a show at the Grandstand at the Freeborn County Fair. Gatlin interupted the song “I Don’t Want to Cry” twice to allow fans to take photos. -- Andrew Dyrdal/Albert Lea Tribune

After finally finishing the song, Gatlin accused the audience of being too polite.

“We’re getting paid a lot of money,” Gatlin said. “The (fair board) will feel a lot better if you act like you know these dagburn songs.”

Before beginning the band’s fifth song, “Bitter They Are, Harder They Fall,” Gatlin took a shot at a Grandstand usher trying to control audience members.

“What are you the mayor or governor?” Gatlin asked the woman who he continually referred to as the lady in the yellow shirt.

The band next played “I Wish You Were Someone I Love” which featured the lyrics “I thought I had fallen forever in love / The minute your red gingham dress hit the floor” which Gatlin referred to as “close” dirty.

Gatlin then took off his jacket, grabbed his cowboy hat and settled in, calling the previous song “A beer drinking, cheatin’ country song.”

Gatlin asked the crowd which type of church they belong to. Gatlin didn’t ask about Lutherans or Catholics so he received little feedback from the audience, but he did ask his brother, Rudy, who he joked was on a work release program from Texas, why he changed from Baptist to Protestant.

“Unlike Baptists, Protestants say ‘Hi’ to you in the liquor store,” Rudy said.

Larry Gatlin & the Gatlin Brothers played many of their hit songs, including Grammy award-winning “Broken Lady” for the Grandstand, which was about three-quarters full.

Gatlin also played one of his newest songs titled “Johnny Cash is Dead and His House Burned Down,” an up-tempo track about Gatlin’s “big brother.”

The weather was cool and clear during the entire show and the only things causing discomfort were the mosquitoes. The crowd could feel them on their legs and see them in the stage lights as the Texas-born brothers kept swatting away.