The funeral service for Anna Gretina Wallace, of Geneva, will be at 1:30 p.m. Thursday at Community Lutheran Church, Geneva. The Rev. Carrie McElfresh will officiate. Interment will be in the Geneva Cemetery. Visitation will be from 4 to 7 p.m. Wednesday at Bonnerup Funeral Service, Albert Lea and one hour before the service at the church. To sign the online guest book, go to www.bonnerupfuneralservice.com. 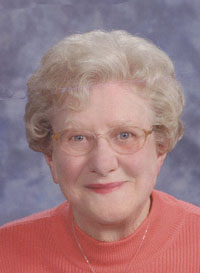 Anna was born June 5, 1926, in Palmer, Iowa to Gerd and Katharina (Janssen) Hartman and graduated from the Palmer Schools. She married Robert Wallace on Nov. 25, 1953, at Palmer, Iowa. They made their home at Bradgate, Iowa, until 1959 when they moved to Dorset. They owned and operated a resort from 1959 to 1966 and then the family moved to Geneva. Anna was a member of the Community Lutheran Church in Geneva and belonged to one of the church Circles, and later to the WELCA. She was also in the quilt making group. She worked as a bookkeeper and did housekeeping for others. Anna was a member of the Grapevine Twist Square Dancers. Her hobbies were sewing, crocheting, doing patchwork (quilts) and baking. Anna enjoyed being with her family, especially her children, grandchildren and great-grandchildren.