Every year for more than 36 years the Veterans of Foreign Wars Women’s Auxiliary sponsor a morning marathon baking event. The members combine ingredients of co-operation, persistence, flexibility, community spirit and kindness to create sufficient cookie treats each Fourth of July for travelers taking trip pauses at the Minnesota Welcome Center on Interstate 35.

Persistence within this Freeborn County group arose from their occupying almost a half-dozen baking locations since leaving the Albert Lea’s VFW stately building on Clark Street around 15 years ago. They next met at the American Legion on Newton Avenue, then moved to the Union Center, which had flooding problems, so they returned to the American Legion, which had moved to North Broadway Avenue. This year they did the entire process at the Moose Lodge inside the Skyline Plaza. 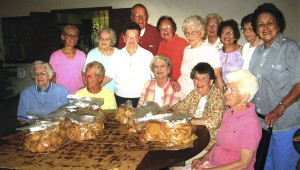 Like their cookie dough, as one member put it, “they still stick together and get the job done.” This year a few more helpers offered a hand for a total of about 16 volunteers, including President Eunice Hatleli’s husband. Duane Hatleli, a 13-year VFW member who’s helped several years in a row, said, “I try to help her out if I can.”

Last year another volunteer’s 7-year-old grandson wanted to join the mix of things, so they put the child to work.

The local Danish brotherhood boosts several VFW Auxiliary members, which helps both interest and participation in the yearly project.

“We welcome anyone who wants to help,” Hatleli said.

Grace Tomson, also a member of the Danish Brotherhood, said, “We kill two birds with one stone by getting both organizations involved together at one time.”

Leona Roberts made the very first batch of cookies by herself in 1975, when Roger Wutzke initiated the first safety break for travelers that year. Both lived in Albert Lea, participating as Southern Minnesota REACT members, which is an organization of emergency radio operators.

The group project began when REACT wrote the VFW Auxiliary a letter requesting their volunteer services.

“As usual, this year they phoned us and asked us to do it again, and we didn’t blink an eyelash when we said yes,” Hatleli said.

Bev Boone, one of the bakers, said, “We’ve done it every year for the same rest stop, except when they remodeled it and then the cookies went to an Austin rest stop. The president recalled that they found out about the change in delivery plans the night before they had their cookie bake.

This year the gathering took place the last day of June. The discussion topic among members turned toward the possibility of the state government shutting down the next day. That would mean their cookie delivery could be in jeopardy. After a few phone attempts to REACT leaders the president announced that they may have to freeze the cookies, but assured the group that REACT would distribute them at the rest stop for Labor Day.

A visitor to the Moose Club could have tracked the annual baking project just by following the peanut butter aroma to the kitchen. Several work station scenes gave visuals to enhance the enticing smells. One group stirred large stainless steel bowls containing various cookie dough recipes. The oven areas warmth filled the bright kitchen. Large cookie sheets covered with four different batches of recipes were moved in and out of baking racks. The grocery shopping took place just a few hours before, in the early morning. Besides peanut butter, ingredients for oatmeal, chocolate chip and a cookie called a “ranger” all make it to the grocery cart. The latter included both coconut and Wheaties.

Every year the volunteer group gets a letter of thanks from REACT. Last year REACT volunteers handed out almost 7,000 snacks, including cookies from the Albert Lea VFW Auxiliary, to the welcome center.

Notations from the guest books include comments from travelers all over the states and the world, such as “What a treat for tired travelers” and “We’ve never stopped at a rest area that was so friendly to visitors.”

Over Labor Day weekend, REACT volunteers once again will hand out Auxiliary cookies to weary travelers. There had been some concern with rest areas being closed during the state government shutdown of whether the cookies could be handed out, but the holiday kindness will go on as scheduled.