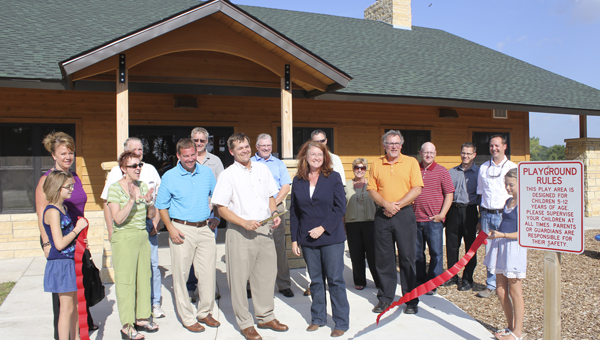 Albert Lea Mayor Vern Rasmussen cuts the ribbon at the new Edgewater Bay Pavilion. Beside him are state Sen. Dan Sparks and former state Rep. Robin Brown. They are surrounded by members of the Parks and Recreation Advisory Board, Parks and Recreation Department staff members and other city officials. Anna and Emma Grossman held the ribbon. -- Jill Jensen/Albert Lea Tribune

The Albert Lea Parks and Recreation Department held the open house ceremony to celebrate the finish of a three-year project that cleaned up a landfill at Edgewater Park and built the new pavilion and adjacent playground. 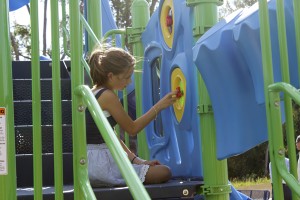 The new pavilion has become a popular site for receptions, parties, reunions and other functions.

Bernadette Clark, who attended the open house, said the old pavilion cannot compare with the new one.

The more-than-25-year-old pavilion and playground, which were sitting atop the landfill, had to be removed when Albert Lea began the state landfill cleanup project in fall 2008, said Jay Hutchison, parks and recreation director. The former pavilion was a basic outdoor shelter, with picnic tables and no walls. The new one has walls. And it has 3,300 square feet of space, a high ceiling, chandeliers, a kitchen, round tables, restrooms and a parking lot. It can accommodate 180 people.

The price tag for the pavilion, restrooms and parking came to about $600,000.

The pavilion and playground were rebuilt with leftover funds from the state landfill cleanup project, secured with the help of Sen. Dan Sparks and former Rep. Robin Brown.

“I thought it was important, if we had the money, to go ahead and replace it so there was something on that end of the park,” Hutchison said.

Brown, who worked on legislation to include Edgewater Park in the state landfill cleanup project during her four years representing District 27A, said the extra funds used to build the new pavilion and playground were essential to putting Edgewater Park back together.

“We really needed the money to make this a useful and a positive addition to the area — in order to truly be a finished project,” Brown said.

Hutchison said the new three-season pavilion, which boasts a kitchenette and attached bathrooms, has already been rented about three times a week for events like wedding receptions since it opened in May.

Shelby Lageson, a 2011 Albert Lea High School graduate, celebrated her open house at the pavilion in June, though the playground had not yet been built.

She said the pavilion, is “really fancy,” with a fireplace, kitchen and chandeliers.

“The new one is so much nicer,” Lageson said.

Construction of the new pavilion began in September 2010 and continued through the summer to sort out a few kinks, Hutchison said. The playground was built this summer.

Besides being an extra source of revenue for the city, Hutchison said the new Edgewater Bay Pavilion is a great “destination spot” for people.

“It’s a great location — right next to the lake,” he said.