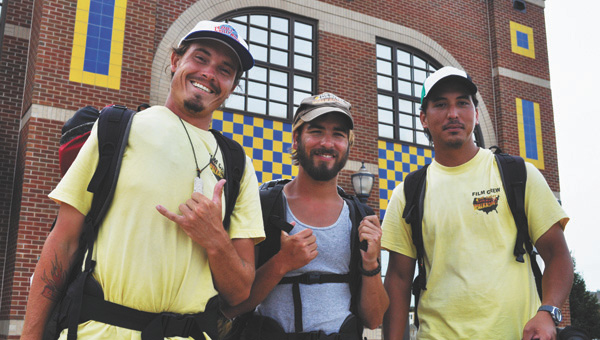 AUSTIN — Three men took their magical journey across the country to Austin Sunday.

Eddie Bond, Michael Nelsen and Bulla Lepen set out March 7 to walk across the continental United States. On Sunday, their path took them to Austin, where a trip to the Spam Museum was a must for the Hawaii natives.

Bond said the trip is a dream come true, and they’re hoping to inspire people to follow their dreams.

“I believe that everything is possible,” Bond said “If you have a dream, you can achieve it.”

It’s especially important to follow your dreams during difficult economic times that have left many people unemployed, Bond said.

“This was a good opportunity for us to live that example,” Bond said.

For Bond, the trip is something he’d been planning to do for years.

“I wanted to do it for a long time, actually all three of us had,” he said.

Bond said he remembers about reading of the travels of figures like Johnny Appleseed.

But it was the words of another historic figure that helped inspire the trip.

The three men were working as street magicians in Hawaii, but then busking was banned.

Though it was a difficult time, Bond made the most of the situation. He said he took the words of Benjamin Franklin to heart: “Every problem is an opportunity in disguise.”

The opportunity was to follow their dream of walking across the country, according to Bond.

For U.S. Army veterans Bond and Nelsen, the trip was a chance to see the country they fought for during their years of service. Bond was stationed at Fort Brag in North Carolina as a medic with the 82 Airborne. Nelsen was a reservist stationed in Hawaii.

They decided to set out on their journey, which they knew wouldn’t be easy.

“It’s a big challenge, and we wanted to first off see if we could do it,” Bond said.

Indeed, the trip has posed many challenges. Bond sold his car and his business of making and selling straight jackets to magicians, performers, films and as Halloween costumes — a business he said was filling a profitable niche — in order to fund the trip.

However, they surpassed their budget in two weeks.

Still, the travelers have made due by bartering services. They’ve spent many nights at campgrounds for free, offering to perform odd jobs in return. On Saturday, they stayed at America’s Best Value Inn in Albert Lea for free before making their way to Austin.

“We have skills that we can trade, which has been very useful,” Bond said.

The trip was almost derailed in Idaho, when Bond separated his shoulder. One doctor told him he’d have to quit the journey, but another specialist said strapping on a backpack would actually be good for him.

He’s continued the trip and went rafting, which he said was very difficult on the injury. Still, he said his collarbone is sticking out, and he’ll require surgery after the trip.

Bond said the experience has been for the best.

“I benefited from pushing myself beyond the limit,” he said.

Bond, who described himself as a very spiritual person, said he wanted to test his limits spiritually and physically.

“The biggest thing is being able to do what we set out to do,” he said.

After making it from San Francisco to Austin, the three plan to ultimately make it to New York.

They’d planned to make it by Halloween, but they’re about two months behind schedule.

While they planned to head south and travel the Appalachian Trail, they’ve altered to a more northerly route. They’ll next travel to Madison and Chicago before passing through Cleveland and Buffalo on their way to New York.

Even though they’ll try to get through Minnesota as quickly as possible, Bond said it’ll be tough to leave Minnesota.

“This has been the friendliest state we’ve been to,” he said.

They debated a detour to Minneapolis, but Bond said they opted to stick with the schedule.

While the trip has been greeted with a dose of Minnesota Nice, Bond said they’ve met great people throughout their trip.

The trip hasn’t gone exactly as planned, but it’s still been worth it. Bond said they feel blessed to be able to the country firsthand.

Bond’s travels won’t end in New York, as he said he would like to travel around the world.

“The experiences are epic and will go with us for the rest of our lives,” he said.