See a video of the swearing in here.

Vowing to be thorough, fair and timely, Freeborn County’s newest district court judge on Friday was sworn in for his position in front of a crowd of more than 100 friends, family and associates.

In Courtroom No. 2 at the Freeborn County Courthouse, District Court Judge Ross Leuning acknowledged the demanding duties of a judge, however, said he will not forget his experiences as a lawyer and the challenges he experienced then.

“This is a happy and long-awaited occasion,” said presiding 3rd Judicial District Chief Judge Robert Benson at the ceremony. 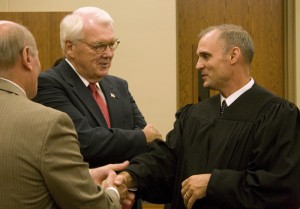 New Freeborn County District Court Judge Ross Leuning, right, speaks with two of the area's other judges Friday after being sworn in as a judge for the 3rd Judicial District. -- Sarah Stultz/Albert Lea Tribune

The position has been vacant since former Freeborn County District Court judge John A. Chesterman retired in January.

The state’s Commission on Judicial Selection recommended Leuning to the governor in April, and then in May Gov. Mark Dayton announced he had appointed the man.

Leuning’s swearing-in was postponed as he completed a tour as a command judge advocate for the U.S. Navy at the Al Asad air base in Iraq. He recently returned home.

In addition to his service in the U.S. Navy, Leuning has worked as senior assistant Olmsted County attorney. Prior to that, he was a partner at the law firm of Walbran, Furness & Leuning.

Mark Walbran, one of Leuning’s former associates, said Leuning is no stranger to hard work. He noted Leuning often was the first to arrive at the office and the last to leave. He also spent many nights and weekends, too.

Leuning is licensed to practice law in Minnesota and Oregon, along with the Minnesota Federal District Court and the 8th Circuit Court of Appeals. He is also certified as a general court-martial judge for the Navy and Marine Corps.

Benson encouraged Leuning to be respectful of the people appearing in his courtroom and asked him to give them the same respect as he would expect for himself.

“We’re all very happy to welcome you, and we are very thankful this day has come,” Benson said.