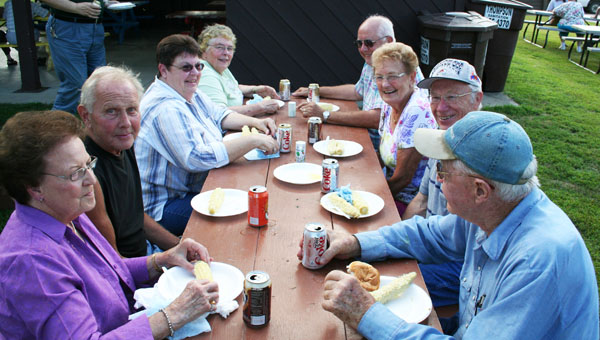 A number of Clarks Grove residents came out for the annual Sweet Corn and Pork Chop Feed. “I really enjoyed it and the corn was good; I didn’t have to cook tonight” joked Arlyss Haug, third on the right. -- Nya Lony/Albert Lea Tribune

“We enjoy having it,” said Clarks Grove Fire Chief Carl Anderson. “The community is really supportive.”

The fundraiser was last Thursday at Bob Hansen Park from 4:30 to 7 p.m. According to Anderson, the event hosts on average about 400 people. This is the fifth year running for the Sweet Corn and Pork Chop Feed.

“The proceeds go to getting more turnout gear for the firemen,” Anderson said. “Things like coats, helmets, boots and gloves.”

There are 25 firemen in the Clarks Grove Fire Department and nine first responders.

While the Sweet Corn and Pork Chop Feed is a fundraiser, it is also an event for the people in the community.

“We like to do this because it’s one of the events that brings the town people out,” Anderson said. “We do it for the community.”

The rows of picnic tables at Bob Hansen Park were occupied by many townspeople, both young and old alike. Neighbors, friends and even whole families came out to enjoy the food and offer their support.

“I came to give a donation to the Fire Department and to enjoy the sweet corn,” said Virginia Davis. “I’m also sharing this event with my son and daughter-in-law; they’ve been here for the summer.”

The Clarks Grove Fire Department also hosts an event called the Pancake Aebleskiver in the spring and sells calenders to each of the households in Clarks Grove to raise funds. Anderson noted these efforts also bring the community together.