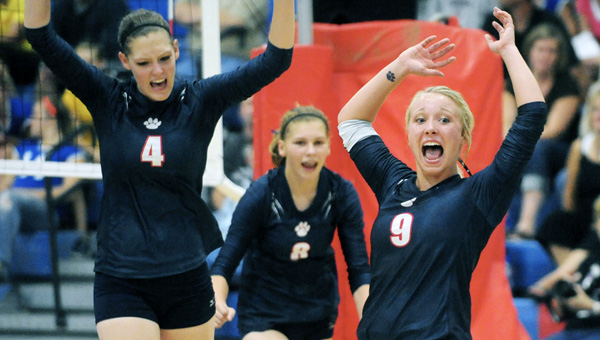 Tigers volleyball comes from behind to beat Southland

ADAMS — There was no doubt they wanted to win.

After dropping the first game Monday to Southland in Adams, the Albert Lea volleyball team rallied from behind in three straight to win its first match of the season.

The young Tigers (1-1), who start three sophomores and a seventh-grader, were emotional from the first serve, screaming and huddling together after each point won. Despite trailing by as many as four points in each of the final three matches, Albert Lea focused its energy and came away on top. 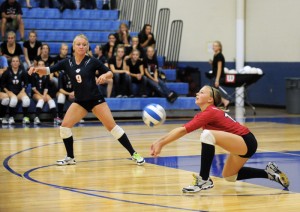 well-balanced through the ups and downs.

“For the young girls I have, they really know how to focus themselves,” Mauseth said. “The team is what pulls everybody together. We have some great leaders out there, and I know they’re very young and very emotional but I think that’s what drives them — their passion to win.”

The Tigers dropped the first game 25-20 and fell behind 10-6 in the second game and forced Mauseth to call a timeout.

The third-year coach told the girls to relax and let the opposing team make the mistakes.

“That’s what they did,” Mauseth said. “They started taking care of the ball, Southland starting hitting them into the net and we started getting some points back.”

Out of the timeout, the Tigers strung together 10 straight points to build a 15-10 lead. The Rebels halted the streak to pull within four points but the Tigers didn’t relent, winning six of the next eight for a 25-17 win.

The most dramatic comeback came in the third game with the teams knotted at one game apiece. The Tigers and Rebels traded points early before Southland went on a 10-2 run to pull ahead 16-8. 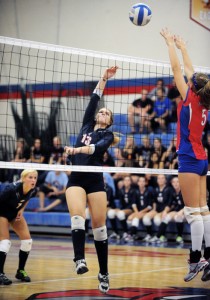 The Tigers began chipping away at the deficit, winning four straight points and seven on nine, but the Rebels kept inching toward a winning 25th point. Trailing 20-15, the Tigers went on its most impressive run of the night and tied the game at 22-22. The Tigers faced two Southland game-points, and down 24-23, an athletic dig by Annie Ladwig saved the game shifted the momentum. The Rebels final two kills attempts went out, and the Tigers won 26-24.

They played really well,” Mauseth said. “They played as a team and got pumped for each other. I think the big thing that appears is that we’re really working as a team at that shows on the court.”

Mauseth said the Tigers players picked each other up despite various age differences.

“We’ve got some seventh-graders out there and the older players pick them up and say ‘Hey you’ve got the next one,’ if they make a mistake,” Mauseth said. “They keep them focused.”

The Tigers were led offensively by Ladwig, a sophomore, who had 17 kills to go along with 16 digs and an ace serve.

Bryn Woodside had 37 set assists, and sophomore right-hitter Sydney Rehnelt and libero Camryn Keyeski, a seventh-grader, each had 19 digs.