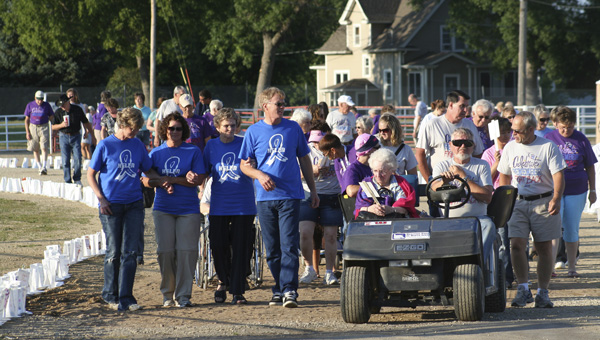 Cancer survivors participate in the survivor lap at the Freeborn County Relay for Life on Friday evening. During the lap the names of the registered survivors were read aloud. -- Garrett Wampler/Albert Lea Tribune

On Friday night and well into the morning hours of Saturday, hundreds of members from surrounding communities gathered at the Freeborn County Fairgrounds for the Relay for Life.

The night’s theme was centered around participants celebrating the survivors, remembering those who had lost their fight and fighting back against the deadly disease with love and support. This year the event raised an estimated total of $131,000. The total is $2,000 more than last year’s event total of $129,000.

“I think about all the ones we’ve lost from cancer,” said Kathy Paulsen, who has been cancer free since 1982. “I hope someday we can find a cure for this dreaded disease.”

Opening ceremonies began with comments from local Relay for Life Chairwoman Vicki Manges and concluded with the stories of honored survivors Todd Schumaker and Georgia Godtland.

Survivors shared their stories with one another about their diagnosis, the battle and their victories. They talked about the obstacles they overcame along the way and how fortunate they are to still be alive.

Paulsen, of Geneva, is a survivor of carcinoma. She was a very active person and one morning she was out running when she was clipped by a truck in her hip area. The wound formed a fluid pocket and in Rochester they drained the area and thought nothing of it. 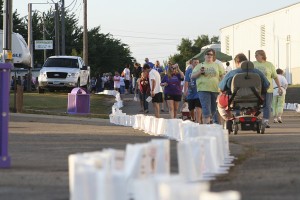 More than 5,000 luminarias lined the relay paths, which included the regular walking track in front of the Grandstand. -- Garrett Wampler/Albert Lea Tribune

A similar area had formed by her knee and they thought it was a similar situation. This time the doctor said she had a tumor and they had to amputate her leg in December of 1982.

Family and friends laughed and cried as they celebrated the lives of those who have succumbed to the disease. Many of them chose to remember their loved ones by lighting a luminaria.

More than 5,000 luminarias lined the relay paths, which included the regular walking track in front of the Grandstand. This year the event organizers extended their pathway behind the Grandstand and back around to the front of the area.

Paulsen and her mother, Carole Schember wrote down the names of people she recognized and remembers them in prayers and in her thoughts.

When the opening ceremonies were concluded the honored survivors and care persons kicked off the night’s festivities by leading the first lap around the track.

The survivor lap, is a time when anyone who currently has or had cancer takes the first lap of the night around the track near the Grandstand. During the lap the names of the registered survivors will be read aloud.

After the lap teams began to walk the course for the cause.

One of the survivors participating in the night’s activities was Sandy Kvenvold, 66, of Clarks Grove. Kvenvold has been cancer free for 11 years.

She was originally diagnosed with invasive ductile carcinoma in her breast and went through a series of procedures including a double mastectomy and reconstructions on both of her breasts.

“It makes me realize that my cancer was not fun, hearing those words and having to tell my loved ones was the hardest thing I had to do in this world,” Kvenvold said.

Kvenvold said she enjoys coming to the Relay for Life and seeing all of the love and support of the community.

The biggest message Kvenvold hopes to get across to people is that all the money raised for research will not do any good unless people are getting their screenings and getting detected.

The Relay for Life is the signature event of the American Cancer Society held each year.

All money raised from the event goes toward cancer research, raising awareness of cancer prevention and cancer treatment.

Watch a video of survivor stories.