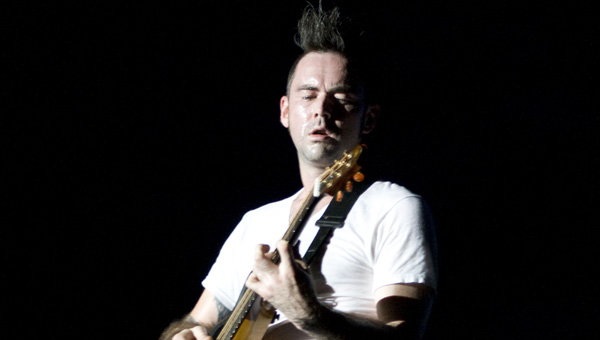 The Grandstand at the Freeborn County Fair took on a little bit of a different sound Saturday as Canadian-based rock band Finger Eleven performed on stage.

In front of a large crowd on the pavement below the stage but only a half-filled Grandstand further out, the five-man band played song after song of hits from multiple albums, including “One Thing” and “Paralyzer.”

It was the fair’s only rock concert of the week, which drew out mainly younger fans 30 and younger. It attracted the smallest crowd of the week — smaller than the 2010 crowd for rock group Hinder, which was the first year with a more alternative band in the fair Grandstand lineup.

During the Grandstand acts of the rest of the week, people could reserve bench seats close to the stage; however, for the Finger Eleven concert, the benches were cleared away and anyone who wanted could stand in the area closer to the stage.

There were a few incidents of crowd surfing and moshing that were halted early on by Freeborn County Sheriff’s Office deputies, but otherwise, no major incidents appeared to have been reported.

Finger Eleven took over the stage at about 8:30 p.m., starting with songs including “Pieces Fit” and “Complicated Questions.”

After a few songs, the band switched to songs from their newest album “Life Turns Electric,” including their first single of the album, “Living On a Dream.”

People snapped photographs and danced, while belting out lyrics.

Other songs performed included “Good Intentions” and then a guitar solo by lead guitarist James Black leading into the hit “One Thing.”

Concertgoers sang along, and lead singer Scott Anderson complimented the crowd on their singing.

“That was beautiful; you sounded great,” Anderson said.

The band then transitioned into what they called some “heavier” songs, including “Drag You Down,” “First Time,” “Quick Sand,” “Talking to the Walls,” “Whatever Doesn’t Kill Me” and “Good Times.”

After the crowd screamed for an encore, Anderson brought back cups of beer for his band members and the group performed two more songs, including hit “Paralyzer.”

After being on stage for almost 1 1/2 hours, band members threw a bunch of guitar picks and drumsticks into the crowd of fans.

Finger Eleven, which formed in 1989, is from Burlington, Ontario, and was originally called the Rainbow Butt Monkeys.

They have released five studio albums, including the most-recent album “Life Turns Electric,” released in 2010.

Their 2003 self-titled album obtained gold status in the United States and platinum in Canada, with single “Paralyzer” reaching No. 6 on the U.S. rock charts.

See a photo gallery of the concert.