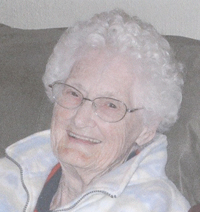 Florence was born Dec. 29, 1913, to John and Hulda (Anderson) Brindel in Wabasha. She attended Catholic School in Albert Lea and on Jan. 22, 1936, was united in marriage to Russell F. Hendrickson at the First Lutheran Church in Albert Lea.

Florence had been a Freeborn County resident all of her life and a longtime member of the First Lutheran Church. She had been employed for many years at the Hendrix Laundry and retired from Land O’Lakes in 1979. Florence would also take in laundry and ironing in her home.

Florence was an avid Minnesota Twins fan. She loved her flowers and garden, playing bingo, trips to the Casino and hanging out the laundry!