From junk to funk 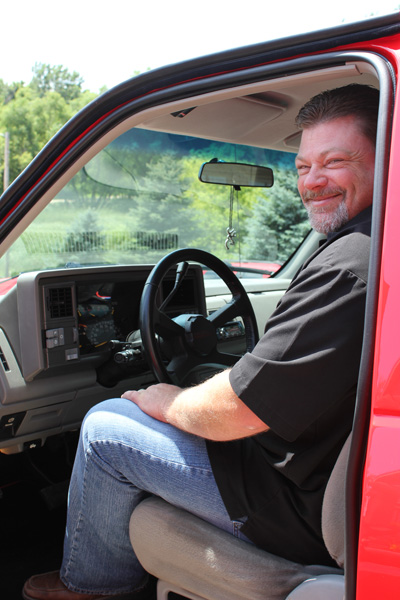 Mike Swalve sits in the 1994 Chevrolet short-box truck that he reconditioned over the winter. -- Jill Jensen/Albert Lea Tribune

He caught the bug again.

An itch in fall 2010 prompted him to begin reconditioning vehicles again, but this time Mike Swalve is doing it for his own collection.

After a 13-year hiatus from repairing and selling vehicles, Swalve bought a 1994 Chevrolet truck to be his “winter project.” 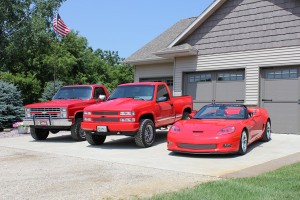 Two trucks in Swalve’s “sporty” collection sit next to the red Corvette they were painted to match. -- Jill Jensen/Albert Lea Tribune

Now, he is working on six short-box trucks, two of which are almost done.

To do so, he hunts down “hard-to-find” parts from all over the United States. He said bucket seats and factory tachometers, which measure the revolutions per minute of the engine, are two things that make a truck sporty.

“All the things that I think that truck should’ve come with, but it didn’t,” Swalve said.

Swalve, who said he has always been interested in cars, began work at Dave Syverson Truck Centers at the age of 19, where he “really learned a lot of my stuff.”

While he worked full-time at the company, he began restoring vehicles on the nights and weekends and selling them to make some extra money.

Until 1998, when he quit his side job, he said he did much of the “heavy stuff” — putting an engine in, for example — but now he is much more into the fine-tuning.

“I used to do all that stuff, but now I’m into the details,” Swalve said. “It’s the little things that make it stand out.”

This time, he has hired old friends, like Dick Fitzlaff, to help him out. 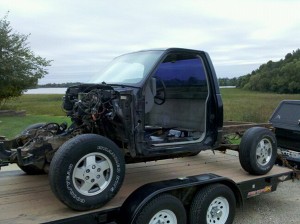 Swalve’s ’94 flagship before he restored it. -- Submitted photo

Fitzlaff, who is retired but still works at Dave Syverson, runs around the country picking up trucks and parts for Swalve.

“It’s interesting,” Fitzlaff said. “I get to go all over.”

Fitzlaff said he works for Swalve as often as needed and has driven to places like North Carolina to bring back a truck Swalve bought for his collection.

“Finding these trucks, finding these parts, figuring out how to make them really cool — that’s kind of my thing,” Swalve said.

Swalve said he wants his collection to be special and unique. That’s why he goes out of his way to find the perfect parts, like the bucket seats for his 1994 truck, which happened to be on the East Coast.

“I don’t want somebody to walk around my truck, going ‘Yeah, it’s just another farm truck. It just looks like my Dad’s truck,’” Swalve said. “I want them to look at it and go, ‘Wow, that thing’s really cool. I’ve never seen this or I’ve never seen that.’”

He said he likes to show off his collection by participating in cruises, like the Eddie Cochran cruise held this June.

Many of his helpers, including Fitzlaff and Adele Helleksen, drove trucks from his collection in the cruise.

“I have more of a mommy car now so it’s kind of neat to drive something with a little more power and a little more pizzazz to it,” Helleksen, who owns Albert Lea Tailors, said.

Swalve said Helleksen, who he used to work with at Dave Syverson, is a “sander master” and has the patience to work on his short-box trucks.

Swalve said he’s involved in his hobby every day, whether he’s scouring the Internet for parts or taking off with fiancée Dawn Freeman to check out a new truck on a weekend trip.

Although Freeman said she can only distinguish a truck by naming it the “shiny, red one,” Freeman said she has noticed a change in Swalve’s mood since he began reconditioning vehicles again.

“He has a strong passion for it, that’s for sure,” Freeman said.

Transforming a vehicle from “junk” into something unique gives him a sense of accomplishment, Swalve said.

“I like taking something that is just crappy and making it the best that it can possibly be,” he said.

Interesting fact: Swalve drew, designed and was the general contractor for his house, which took him more than two years to build. He bought the land from Dave Syverson Inc., where he has worked since he was a teenager.