Getting a jump on school 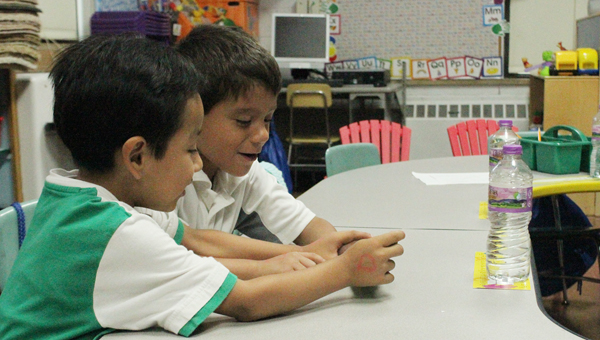 A program that saw success last year at Hawthorne Elementary School has expanded to Halverson Elementary this year.

Teacher Heather Leach has organized the program both years with the help of other teachers and said she hopes to expand Jump Start to Kindergarten to all four elementary schools in the district by next year. 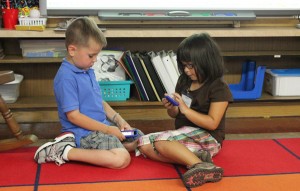 Two 5-year-olds work together counting numbers one through nine with a game on an iPod Touch. Both are enrolled in the Jump Start to Kindergarten program at Hawthorne Elementary School. -- Kelli Lageson/Albert Lea Tribune

“I’m writing a grant right now and we’re trying for all four next year,” Leach said.

The program has only been possible through grants from the Education Minnesota Foundation and donations from area businesses. This year parents could sign up through Community Education, and the fee was $50 or $15 with a scholarship. The program also expanded its hours to four-hour days for three weeks.

The program aims to help children who are about to start kindergarten, who may not have had much schooling experience. Not only do children work with letters and numbers, they also learn about some of the social aspects of school.

“They’re in a smaller group setting getting acclimated to school,” Leach said.

Throughout the four-hour day children work with letters, sounds and numbers. Toward the end of the day Leach hands out iPod Touch devices that have number and letter games installed. She said they’re a good supplemental device.

“It reinforces the things we learned in a fun game setting,” Leach said. “It’s amazing what you can do with them.”

Leach is happy about the progress the children are making, including Juan Garcia who can now write his name. His mother, Blanca Garcia, said she thinks the program has helped Juan immensely.

“I’ve seen the progress my son has made — it’s been wonderful,” Garcia said. “I recommend it to anyone who has children who need help.”

With grant money that equaled about $11,000 to use for iPod Touch devices and the bags children receive. Each child gets a book bag to fill with books and flash cards to take home for the evening. Leach said she hopes this gets parents involved with their child’s learning as well as get students used to homework.

Leach also likes to include parents by having events like one on Thursday where all the children and parents from both schools will be invited to rock climb together. She said she hopes parents and children meet each other so kindergarten doesn’t seem so stressful.