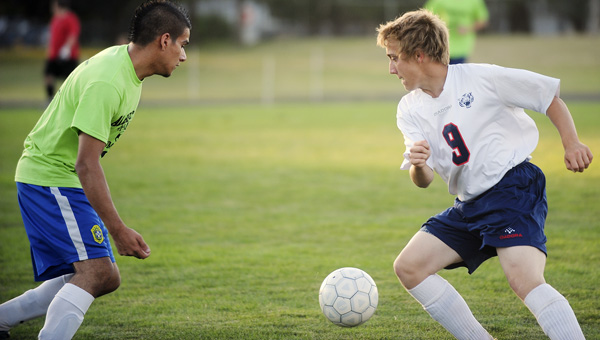 Tired and sweaty, the alumni of the Albert Lea High School boys’ soccer program stood along the pitch at Hammer Field on Saturday, announcing their retirement from the game of soccer for 364 more days. 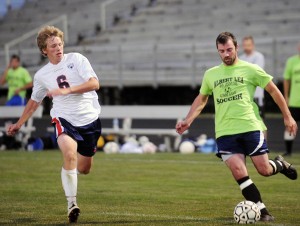 They had just managed a 5-0 shutout against the 2011-12 Tigers squad in the fourth annual Albert Lea soccer alumni game, avenging last year’s 3-0 defeat.

“This is always so much fun, and it’s great to see all these guys out here playing soccer,” boys’ soccer head coach Elia Romano said. “This is really why I coach so people five, 10, 15 years later can still be enjoying soccer.”

Felipe Ambriz, a 2009 Albert Lea graduate, lead the way for the alumni with two goals. Goalkeeper Jake Williams was selected as the player of the game holding the varsity team scoreless.

Twenty-three seconds into the contest, Ambriz managed his first goal of the game. Ambriz, who was a captain for the Tigers in his junior season, shot the ball across the front of the goal and buried the ball into the left side of the net. 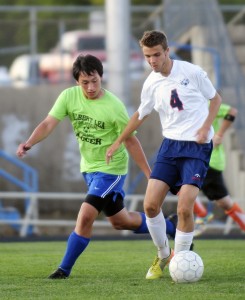 “It brings memories from when I used to play here and it is a good thing for the younger kids to learn from us,” Ambriz said, about the alumni contest. “I think it is a great program and a fundraiser for the high school.”

Sophomore Preston Smith offered the Tigers’ first challenge to Williams, firing a hard shot toward the alumni goal but was denied by the 2006 graduate. The Tigers kept Williams busy in the net early in the game, including junior Tyler Shaw dribbling through defenders and forcing Williams to make a diving save.

“I’m really pleased with what I saw out of our team,” Romano said. “We generated as much offense as they did. We out shot them 23-18 in the first half.”

The alumni wouldn’t back down from the Tigers’ attempts. Cal Pirsig, a 2011 graduate who now plays for Northwestern College in Orange City, Iowa, found the goal putting the alumni up 2-0.

“To see these guys out come back here and having a good time it is hard to root against them,” Romano said.

Zach McGinnis delivered more excitement in the 21st minute of play when he delivered a header into the goal. McGinnis, a 2007 graduate of Albert Lea, received the ball from Oscar Hernandez, who played his last season with the Tigers. 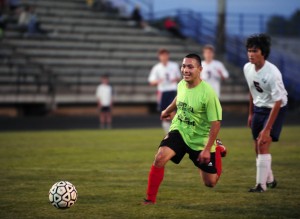 Felipe Ambriz, a 2009 graduate of Albert Lea, was one goal shy of recording a hat-trcik in the 5-0 alumni victory against the 2012 Albert Lea boys soccer team.

After the half, the Tigers came out hungry and rattled off two shots on the alumni goal in the first two minutes of action.

The game remained a back-and-forth chess match until the 68th minute. Ambriz received a pass down the center of the pitch from Ben Frayne, turned and fired a rocket into the bottom right corner for his second goal of the night.

Frayne earned a goal of his own with seven minutes and 25 seconds remaining in the game. The 2004 graduate was able to deliver the final goal off of a pass from Hernandez directly in front of the net.

“We were generating chances but they were really making great plays,” Romano said. “We’ve come along way in the last two weeks from where we started and were really doing a good job early finding people in space.”

The Tigers are coming off of a 7-8-1 campaign and begin their real test when they open the season at Austin on Tuesday before hosting Waseca on Thursday at Hammer Field. 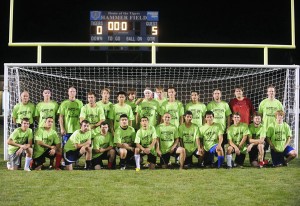