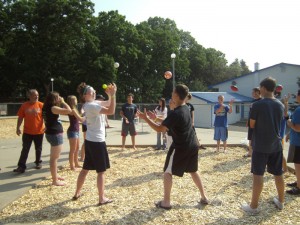 FFA officers from both the Albert Lea and Glenville chapters participate with help from adviser, Kim Meyer, in a team building activity one morning during their retreat. -- Submitted photos

All students look forward to the summer. The warmth, the fun and of course sleeping in! For 15 students their summer started by taking a trip to Mt. Olympus in Wisconsin Dells, Wis. These 15 students were from the Glenville-Emmons and Albert Lea FFA chapters. They were chaperoned by teachers Angie James and Kim Meyer.

While on the trip, the officers not only had fun but learned leadership skills. In the morning the two schools would break into their chapters and talk about goals. Some other things they did were play leadership games to help learn how to work as a team. 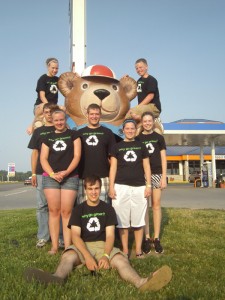 Sam Johnson, Glenville-Emmons FFA historian, said he thought the team got closer and became a family. He also said they bonded with the Albert Lea group.

The officers also got to swim at the water park at Mt. Olympus and go on roller coasters and go carts at the theme park.