Gurus of the grill 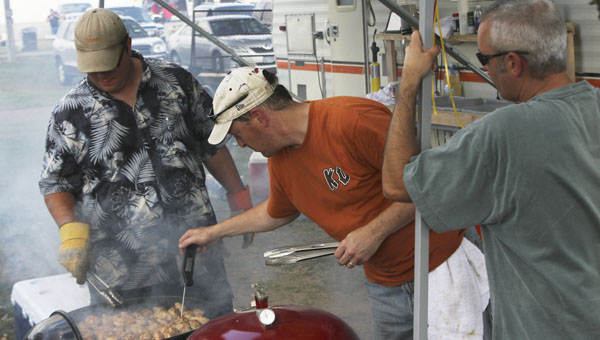 On a houseboat on Rainy Lake, three guys who like to barbecue and some of their friends fixed up some chicken wings.

The three guys fixed a few of their usual sauces, the ones they used in barbecue competitions, but Matt Jacobs decided to scrounge among ingredients on the boat and found a jar of Planters peanuts. He had an idea. Brad Elo and Rob Van Hout of the Twin Cities joined in and together they created a peanut sauce. 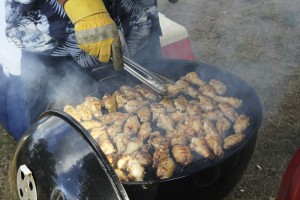 Brad Elo of the FNG BBQ team turns the chicken wings grilled in peanut sauce that has its origins on a houseboat on Rainy Lake. -- Tim Engstrom/Albert Lea Tribune

Their boathouse buddies, serving as taste testers, decided this thrown-together peanut sauce was better than the tried-and-true stuff.

As the team named FNG BBQ, Jacobs, Elo and Van Hout brought their peanut sauce to the Big Island BBQ State Championship for event-goers to taste their wings on Friday night at the Freeborn County Fairgrounds.

“It’s excellent,” said Nick Gustitus, an Albert Lean who was going booth to booth to taste wings Friday. “I’d have it again if I had room. I’d order it in a restaurant.”

Tammy Stolaas of Albert Lea said it was her first time trying a peanut sauce on chicken. She described the taste as sweet and sour. 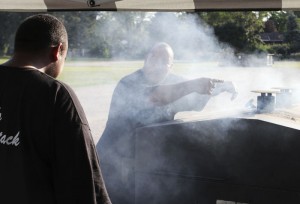 J.R. Lewis with the Rochester restaurant Bob's Smoke Stack Ribs describes to Tim Gayles how the team had to regulate the temperature of the smoker when they switched it from gas to charcoal. Tim Engstrom/Albert Lea Tribune

Of course, at this point, I had to try it. It tasted like a pleasant cross of liquefied peanut butter, soy sauce, pepper, ginger and some intangibles. On chicken, it tastes great and was unlike the other sauces at the chicken wing competition Friday.

The enthusiasm these cooks have for grilling is noticeable right away when meeting them. One, Dan Olson of Albert Lea, goes to four or five competitions a year in southern Minnesota and northern Iowa. It was his third year participating in the Big Island BBQ.

He was serving chicken wings to event-goers Friday while his brother, Dave Olson of Winona, was finishing the chili, which also could be tasted by the people attending.

Dan was eager to use the new smoker he was taking to competitions this summer. He planned to place the brisket and pork shoulder on the smoker around 10 p.m. Friday. 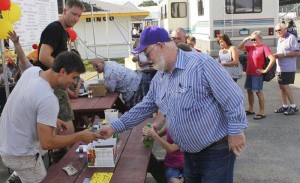 Eric Jensen of La Crosse, Wis., sells the first $15 ticket of the Friday night tasting for chili and chicken wings to Albert Lea resident Al Christensen. Though the tasting is over, Saturday offered food and beverages from vendors, and people can see the grill masters at work. The contest wrapped up at 5:30 p.m. Saturday. -- Tim Engstrom/Albert Lea Tribune

Bob Lewis of Bob’s Smoke Stack Ribs in Rochester was competing in the Big Island BBQ for the first time.

He said he had been at the Med City BBQ in Rochester and Big Island BBQ organizer Perry Vining came by and promoted the Albert Lea event to him and other competitors.

“Otherwise, I would have been at my restaurant,” Lewis said.

Lewis said he is glad to be in Albert Lea and was hoping to visit The Taco King at Clark Street and Broadway Avenue because he knows the owner.

“Some show a little bit. They only goes so far, and that’s it,” he said.

The Pork ’n’ Pirates have been at the Big Island BBQ since the start in 2008. Because of family commitments, this will be the only competition these three teachers and a daughter can attend.

“Perry does a fabulous job promoting the area,” said Tim Prescott. “The event is really interactive with the public.”

The team comprises Prescott, his daughter, Cassie, and Tim and Mary Arndt. The Prescotts are from St. Paul and the Arndts are from Rosemount. They were handing out samples Friday from their three-meat chili. The three meats were ground sirloin, chorizo and andouille.

The sound of “mmm” emanated from the Pork ’n’ Pirates booth.