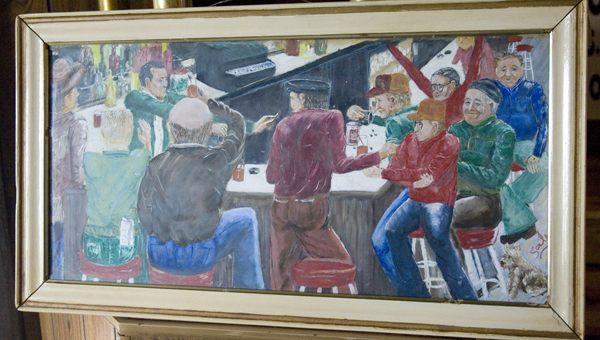 This painting, created by Darryl Salo, was created in the late ’70s. It depicts several Wilson & Co. employees sitting around the bar at Eddie’s Bar in Albert Lea after a hard day of work. -- Sarah Stultz/Albert Lea Tribune

Hanging on the wall behind the counter at Eddie’s Bar is a painting that speaks a thousand words.

No bigger than 2 feet wide by 1 foot tall, the painting is often a point of conversation, said Pat Fitzgerald, bar owner. 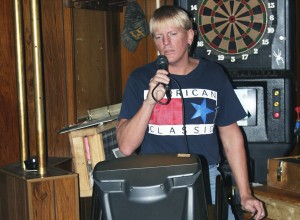 Eddie’s Bar these days is a popular place for karaoke singing, as shown in this 2007 photograph. -- Tim Engstrom/Albert Lea Tribune

The painting was created by former Albert Lea resident Darryl Salo, known to many as “Finney,” in the 1970s.

Salo worked at the Albert Lea Art Center in maintenance and would often stop into Eddie’s Bar for a drink on his way home from work, said bar manager George Gillespie.

One day Fitzgerald and Salo got to talking and it dawned on the owner that maybe Salo would like to make a painting.

“It’d be kind of fun having a painting of a bunch of the guys,” Fitzgerald said.

He designated Salo as the painter, and that’s exactly what they did.

Created in the late 1970s, Salo depicts seven or eight men — mostly Wilson & Co. workers — who are coming into the bar after a long day at work. The meatpacking plant was just a short walk up the street and across the tracks.

Behind the bar serving drinks in the painting is Fitzgerald, who has owned Eddie’s Bar now for 42 years. 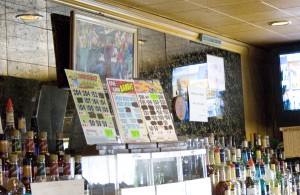 The painting hangs on the wall behind the bar and often is the topic of conversation. -- Sarah Stultz/Albert Lea Tribune

Around him on the other side — getting drinks or socializing — are Butch Bybee, Lefty Trytten, Whitey Hagen, Gordy Quinlivan, Lowell Pike, Ruben Dokken, Merv Schumacher and Louis Cunningham.

Painted sitting on the floor is Fitzgerald’s dog, Mr. Whiskers.

It’s unclear what the topic of conversation is.

Gillespie said at least three or four of the men depicted have since died, and the families of those deceased often want to purchase a copy of the painting or ask additional questions.

But for now, Fitzgerald said, he plans to hold onto the painting and continue to allow it to hang on the wall — a reminder of another era in Albert Lea’s history. The packing plant closed in 2001 following a devastating fire.

Eddie’s Bar can be found at 719 Marshall St., Albert Lea.