Funeral services for Irene F. Benesh, 89, of Hayward, will be held at 10:30 a.m. Wednesday at the Hayward Lutheran Church. The Rev. Katie Fick will officiate. Burial will be at Greenwood Cemetery. Visitation will be Tuesday from 5 to 7 p.m. at Bayview/Freeborn Funeral Home and one hour prior to the services at the church. To sign the guestbook go to www.bayviewfuneral.com. 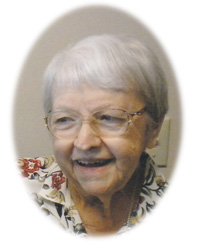 Irene F. Benesh was born on Feb. 16, 1922, in Freeborn County the daughter of Frank and Mary (Mudra) Kycek. She was baptized and confirmed at the Hayward Lutheran Church. Irene attended grade school in District 35 and graduated from Austin High School in 1939. She furthered her education at the Austin Normal Teacher Training in 1940. Irene taught country school in Freeborn County for a few years. On May 18, 1946, Irene was united in marriage to James Benesh in Albert Lea. The couple farmed most of their life three miles north of Myrtle. Irene was a member of the Trondhjem Lutheran Church and involved in various WELCA groups at the church where she held various offices. She was also a member of the Western Fraternal Lodge No. 44 for over 75 years. Her enjoyment was her family, friends, church and reading.