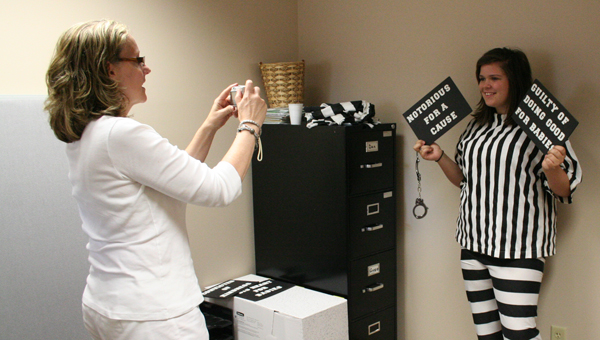 On Wednesday I went to jail.

Thankfully, it wasn’t real jail. I had received a call about a month ago that I had been nominated to turn myself in peacefully at the March of Dimes Jail & Bail. 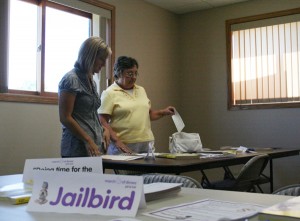 While no one is actually kept prisoner, people show up to turn in any funds they have raised and to continue raising funds while eating some free lunch — so you see the conditions weren’t too harsh.

I showed up at Ameriprise Financial at 222 E. Main St. on Wednesday and had to get my mugshot taken with some prison garb and handcuffs. After I was fingerprinted, I turned in money I had raised before the event. I then had the option to sit down and call people I knew to ask for pledges.

Another jailbird, Coreen Johnson, said she’d never been to the Jail & Bail before but has had people call her for “bail,” or a pledge, in the past.

“I just thought it sounded like fun,” Johnson said.

Community Director Amanda Bigus said the Rochester office of March of Dimes does events like this throughout southeastern Minnesota. She estimated Albert Lea’s event would raise around $15,000.

“People have fun with it,” Bigus said. “We’re working toward a day when every baby will be born healthy.” 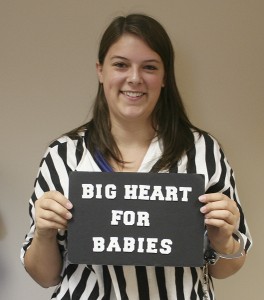 Tribune Special Projects Editor Kelli Lageson posing for a mugshot at the March of Dimes Jail & Bail on Wednesday.

The March of Dimes was established by President Franklin Roosevelt in 1938 with a mission of ending polio. The nonprofit organization continues to research treatments and preventions for problems such as birth defects and premature birth. One of those treatments was helping with the development of surfactant therapy for premature babies, a therapy that helped baby Luke Gooden of Alden.

Luke, the son of Megan and Brady, was born 12 weeks early and weighed less than 2 1/2 pounds. The Gooden family was chosen to be ambassadors for the local Jail & Bail, and, though they weren’t able to make it to the event, Bigus said they believe in the March of Dimes’ mission.

Bigus said with the online fundraising tool many people work toward their “bail” before the event. Though there is no set bail amount, organizers do suggest people try to raise $1,000.

“We’re not going to keep anyone in jail,” Bigus said with a laugh.

Another jailbird, Stacey Rupe, was at the event calling friends and family to get pledges. He said he doesn’t know who nominated him, and he liked the ability to fundraise online.

“They just called me at work and I agreed to it,” Rupe said.