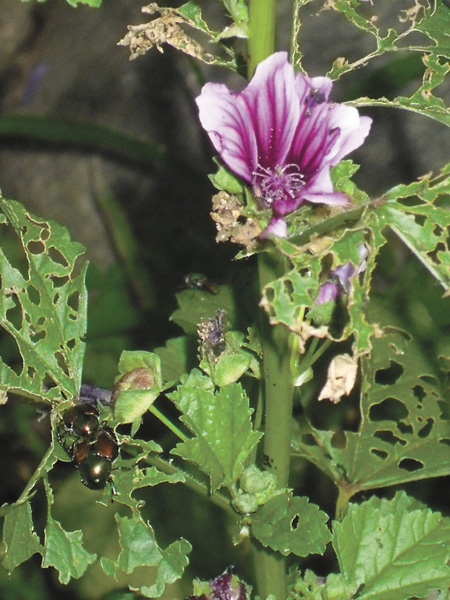 For five years, Gregg McConnell, a groundskeeper at the Oakwood Cemetery in Austin, has been watching Japanese beetles ruin the foliage.

“There’s so many flowers out here, there’s really nothing we could do,” he said.

McConnell added the beetles have even damaged some of the trees at the cemetery.

People are using several methods to eradicate the pesky critters.

Beetle traps are effective at capturing adult beetles in trees, as the beetles land on the slippery plastic and fall into a bag from which they cannot escape.

Aimee Whiteaker, manager of Dolan’s Landscape Center in Mapleview, said the traps come with enough refill bags to last the average homeowner for one year. Whiteaker sold out of traps recently, but she said there are other effective methods, as well.

Along with a chemical that can be sprayed on trees to kill adult beetles, Whiteaker recommends fungus spores that will live underneath the soil when applied to grass. The spores kill beetle eggs and grubs before the insects ever leave the ground, and more spores grow with more beetles. Whiteaker said one application can last for as many as 23 years. Though in the city, it may be better for communities to work together. Treating one yard won’t be as effective as treating a whole block, Whiteaker said.

Whiteaker said products also exist for eradicating earwigs. With hot, humid weather, more earwigs have been present, but organic, pet-friendly chemicals can be applied to the base of homes as barriers. Household, non-toxic chemicals are available as well for those who have earwigs inside their homes. Whiteaker said earwigs prefer damp conditions and often get into hampers, bathrooms and other wet areas of homes. Though the insects don’t wreak havoc on plants or humans, they can be unsightly to some people. Eliminating wet, dark places where earwigs can hide is a good preventive measure.