Funeral services for JoAnn Brayland, 74, of Alden will be held at 10:30 a.m. on Tuesday, Aug. 30, at Redeemer Lutheran Church in Alden. The Rev. Greg Ofsdahl will officiate. 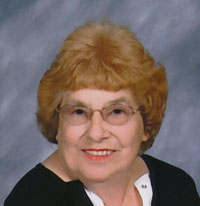 Interment will be at Carlston Cemetery. Visitation will be 4-7 p.m. Monday, Aug. 29, at Bayview/Freeborn Funeral Home and one hour prior to the service. To sign the guest book, go to www.bayviewfuneral.com.

JoAnn Brayland was born April 26, 1937, to Albert “Pete” and Margaret(Elmer) Hochreiter in Albert Lea. She grew up in Walters and later in Wells where she attended school. After school JoAnn had several waitressing jobs in Mankato. In December of 1959 she was united in marriage to Charles Whitney of Delavan. Together they raised four children. In 1967 JoAnn moved back to Wells after Charles death where she worked several different jobs.

On Dec. 23, 1972, JoAnn was united in marriage to Dennis Brayland of Alden. She then became a farm wife and a homemaker. JoAnn was a member of Redeemer Lutheran Church and volunteered for Meals on Wheels. She enjoyed embroidery, needle work, traveling and going to garage sales.

JoAnn was preceded in death by her parents; husbands, Charles and Dennis; son, Dennis; and grand-daughter, Denise.