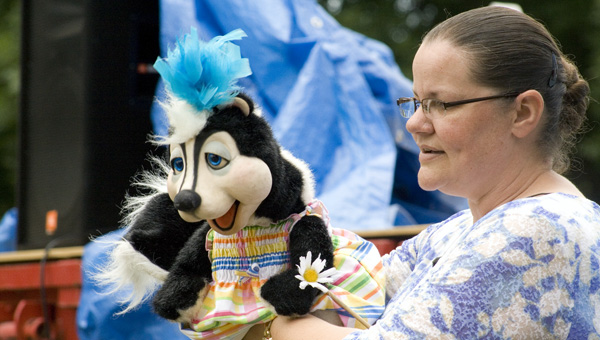 WELLS — Children and adults alike in this small community were treated to a dose of laughter and good-hearted fun Saturday during a ventriloquist and puppetry act at the town’s annual Kernel Days festival. 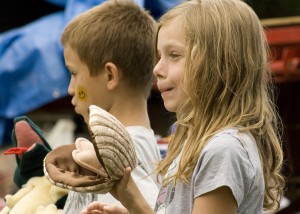 Children practice being ventriloquists to a variety of puppets Saturday at Kernel Days in Wells. -- Sarah Stultz/Albert Lea Tribune

Next to a stage in Half Moon Park, ventriloquist Shari Ellingson and her puppets of Gator Alley & Co. did more than just entertain, however. They also taught valuable lessons of respect and making a difference.

“There are so many kids out there who are told they’re no good,” Ellingson said. “But they can make a difference.”

“It’s sometimes very hard to change a habit that we do over and over and over,” she told the crowd. “Go home today, begin to change some habits you have and be a hero.” 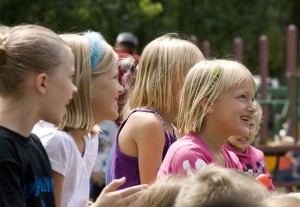 Bringing alive three of her puppets — Bubba, an alligator; Sweet Pea, an elephant and Daisy, a cow — Ellingson taught about what to do if you make mistakes, encouraged people not to lie and asked the crowd what they could do each day to do something nice for someone else.

“You can grow to be beautiful,” she said.

In between the puppetry acts were small acts of simple magic and illusion, along with music.

Ellingson also taught the crowd the first steps of becoming ventriloquists for themselves and let a handful of children try out her tips on some smaller puppets.

Six-year-old Jeremiah Schwartz said his favorite puppet was the skunk named Daisy because he thought it was funny. 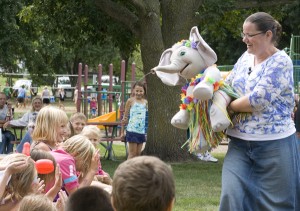 Ellingson said she does not always teach the same message in each show, but she tries to share a meaningful message each time she performs.

She is based out of Mankato and has been performing at Kernel Days in Wells for at least four years.

The ventriloquist show was just one of several activities taking place at Kernel Days throughout the weekend.

On Friday there were dodgeball and volleyball tournaments, tractor races, live music and fireworks, and on Saturday, there were softball, bocce ball and bean bag tournaments, other games, a car cruise, a parade and a talent show, among others. On Sunday, was the first-ever Kernel Days golf tournament, along with a food, fun and worship event that evening. 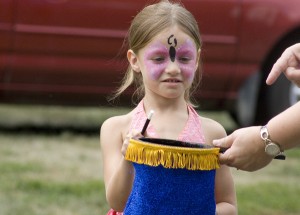