WELLS — The United South Central school board is considering a plan to remodel and add to the school, and a special school board meeting will determine the outcome soon.

Superintendent Jerry Jensen said board members haven’t chosen an official plan to move forward with and have more questions before they move forward with a referendum. At a school board meeting Tuesday the board chose the remodel/addition plan over the new building plan, both of which were presented to the community on Aug. 11. Board members said they’d rather see a new building but thought a less expensive bond for the remodel/addition plan would be voted through.

“This is the plan we want to pose to the community, but we still have some questions to answer,” Jensen said. 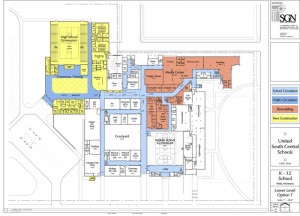 Shown is the lower level of United South Central School in Wells. The addition is on the upper left, highlighted in yellow. The orange color signifies what will be remodeled, and blue shows traffic patterns throughout the school. -- SGN Architects

“All of our school buses sit out at this point,” Jensen said. “It would be helpful if you could extend their life.”

Included in the original remodel/addition plan was plumbing updates to replace all horizontal pipes in the school, which have been causing problems. The board asked to see costs of what it would be to replace all the plumbing.

Jensen expected to be able to have answers and projected extra costs with the additional projects by a special school board meeting to be held on Sept. 6. At the meeting the board would have a concrete price for the project and could take the next steps toward a referendum. If they move forward the plan would go to the state Department of Education for review and comment. The district would receive a response within 60 days and could potentially hold an election on Dec. 20. Board members at Tuesday’s meeting said they’d definitely like to hold additional community meetings if this plan is chosen.

The original plan presented to community members on Aug. 11 doesn’t have some things people may want to see like tennis courts, a track, a bus garage, complete plumbing update or a planned spot for a playground. What it does include is 40,000 square feet of extra space.

Jensen said the school isn’t experiencing any overcrowding, but that many areas need updating. With all the extra space about seven classrooms would be created, which Jensen said would be appreciated and utilized for various purposes.

“With the addition the school could easily stay in session — the remodeling will be more of a challenge,” Jensen said.

If the possible referendum would be approved work could start as early as summer of next year. Jensen said tentatively the remodeling projects would take place in the next two summers, while the addition could be built during the school year.

Features of the possible addition

The addition would include a new kitchen and dining/commons area, a new gymnasium, locker rooms for high school students and administrative offices. Jensen said the decision to move the offices would be so they would be near what would become the main entrance to the school. This entrance would be the only one open during the school day and visitors would check in at the office.

The entrance would also be the main entrance for all students who could hang out in the commons area or move to the high school or elementary areas. The addition would sit on the northwest corner of the school, which would create a need for a new spot for playground equipment that currently sits in that area.

With a new gymnasium the school would no longer have to rent athletic space for practices and games from St. Casimir’s Catholic School, which is across the street from USC.

“We’re looking forward to this — this kind of thing could add amenities that we don’t have at this point,” Jensen said. “But that’s really only half the project.”

Features of the possible remodeling

The original purpose of looking at a new building or a remodel/addition plan was the deteriorating state of the school. Jensen said the school is one of the oldest in the state, and maintenance has been deferred because of funding issues. With deferred maintenance comes structural issues like leaking pipes, damaged roofing and a plethora of other structural problems.

With the remodel/addition plan the school would have all these problems fixed and would have to continue with scheduled maintenance in the future. The school comprises different additions of different ages. The original, three-story high school was built in 1932. An elementary wing was added in 1952, as well as a gym addition. Another addition was added to the high school in 1961, and in 1974 a music wing was added. Only five districts in Minnesota have older buildings than USC. 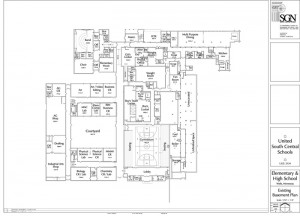 Shown is the existing floor plan of the lower level of United South Central School in Wells. -- SGN Architecture

“Most of the places in the building would be touched in one way or another,” Jensen said.

All exterior windows, with the exception of a few newer windows near the elevator that were installed in the ’90s, and doors would be replaced. With new exterior doors, emergency panic devices could be installed.

The two current high school and elementary libraries would be remodeled back to classrooms, and one library for all ages would be created out of space on the lower level of the school where there is currently dining space. Also in the dining and kitchen space a wrestling area would be put. In the remodel plan there is also room for a few computer labs near the library.

“I think it’d be a very good facility,” Jensen said.

Jensen said he hopes the plan is chosen by the board and that the community supports it by passing the referendum because of the school’s need.

“I think everyone would prefer a brand new building, but the community in the past has said they’re not ready for that because they haven’t voted that in — here’s a different approach and a different option,” Jensen said.

He said if the board moves forward with this option but a referendum has not passed, he’ll again be looking for more options to improve the facilities.

“The problems aren’t going away,” Jensen said. “Every year the building continues to age, and every year it gets more and more difficult.”

• 160,350 square feet in the existing school building
• 40,000 square feet are to be added — almost a 25 percent increase in square feet
• 28,000 square feet of the existing building will be remodeled
• 7 extra classrooms will be made with remodeling plan
• $16 million is the estimated cost without including tennis courts, a track, a bus garage or complete updating of plumbing
• 8 years USC has been working with SGN Architects on possible plans for updating facilities