This is the sixth survivor story for Mayo Clinic Health System in Albert Lea and Naeve Health Care Foundation’s newest fund-raiser, “The beat goes on.” The fund-raiser is a $327,000 effort to raise money for crucial, cutting-edge cardiac care equipment for area first responders and the medical center’s ambulance services, cardiology, and cardiac rehab departments.

If Albert Lean Terry Leas has one piece of health advice, it is this: Know your family’s health history.

“I thought I was eating well and I exercised vigorously, regularly,” the now 61-year-old said. “It wasn’t until after my heart attack that I found out my family has a history of heart disease.” 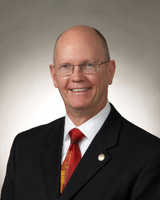 And it was a history on both sides of Leas’ family. His father had a “massive” heart attack, said Leas, and he learned his maternal aunt has been taking cholesterol medication for the last 15 to 20 years.

“I thought I was doing all of the right things,” he said, shaking his head.

“I woke up early in the morning and really just didn’t feel good,” he said. “It felt like there was a lot of pressure on my chest. The pressure continued to increase, I had shortness of breath, and then my upper arms started to tingle. That’s when I woke my wife, Loyal, and said ‘we need to go to the hospital.’”

Once in the emergency room at Mayo Clinic Health System in Albert Lea, Leas said “It was hard to accept I was having a heart attack.”

“Knowing what I know now, yes, of course I was having a heart attack, but I was in denial at that point,” he said. “I couldn’t understand how it could be happening.”

After the emergency room physician looked at Leas’ EKG, he was sent to St. Marys hospital in Rochester via helicopter.

By 3:30 p.m. that same day, Rochester surgeons had put a stint in an artery that was 90 percent blocked.

Friday morning that same week Leas was released home, the following Monday he was back to work without restrictions, and on Tuesday he started in Albert Lea’s Cardiac Rehabilitation program.

Because of how fit Leas was before his heart attack, he was started in phase three of the rehabilitation program, the phase most participants graduate from.

While Leas said he can’t remember seeing any early warning signs, he said he can definitely tell the difference now.

“When I exercise now I notice, and even my friends notice, I don’t get as winded as I used to,” he said.