Many conservation organizations featured at fair

“Everything is nearly copacetic. I fried up some grape nuts for breakfast because I’m trying to eat healthy and I’ve done something about global warming.”

“I turned up the air conditioning. The trouble is that my electric bill is higher than Otis Campbell. I’d like to live in the fast lane but my bank account is nothing but speed bumps. Pop is trying to do more with less. He’ll keep trying until he can do everything with nothing. He won’t get air conditioning, but he and Ma like it cool. They hang out in my living room and spend most of their time yelling, “I can’t hear you” at one another. They’ve eaten all of my gummy species — both worm and bear — the destiny that shapes our ends. Ma told me how she ended up marrying Pop. She was just out of high school and deeply in love. Her sweetheart joined the army. They were so in love that they wrote a letter to each other every day.”

“Did your mother marry your father as soon as he got out of the army?” I ask.

“Oh, Ma didn’t marry the man who wrote the letters. Pop was the mailman.”

It was a day patched together just right. A day like Donovan sang about, “Sunshine came softly through my a-window today.”

I walked outside without my shoes gathering dew.

It was a pleasant change from weather hot enough to wilt plants and people. The weather had been of the too much or not enough variety. I have no influence upon the weather. It’s nice not having the responsibility.

Mosquitoes bit me. I refused to allow them to make the day my enemy.

I took towels off the clothesline and placed them into a basket. Shadows of butterflies danced upon the towels. I checked milkweed for evidence of monarch butterfly eggs. There was frass, but it was not from a monarch caterpillar. Tussock moth larvae were feeding. Frass is a word used to describe insect excrement. I pulled aggressive bittersweet from near the milkweeds. After taking the sun-dried towels into the house, I cut ash trees from the road ditch. The ashes cause snow to settle on the road. I carried the toppled trees to a brush pile I maintain for the birds.

Three things flew over the brush pile. A bat flying at an odd time of day like a winged mammal or a moused bird. The flying mammal gave way to a bumblebee. Bumblebees produce honey, but not enough for beekeepers to harvest. Bumblebees make sufficient honey to feed the colony during spring and summer, but don’t stock winter larders because only the queen survives. A bald eagle flew high overhead. The eagle didn’t know it was our national bird that had recovered from the brink of extinction. It didn’t know that I watched it because I needed to see it.

Aldo Leopold wrote, “Like winds and sunset, wild things were taken for granted until progress began to do away with them.”

A shrew ran past me while I worked at the fair. Cicada killer wasps, looking menacing, buzzed near. The shrew was 4-inches long with tail included. Similar in size to mice and voles, the short-tailed shrew is a common species that is distinguished by its pointed snout, tiny eyes and absence of visible external ears. A venomous mammal, the short-tailed shrew is a voracious eater and a significant predator of insects, earthworms and small mammals. It also eats plant matter. Its venom allows a single bite to subdue larger prey like mice and voles. The shrew has a metabolism rate so high that it eats up to its weight each day. Its venom is not harmful to humans. Few predators eat shrews, but they are a prey species of owls. 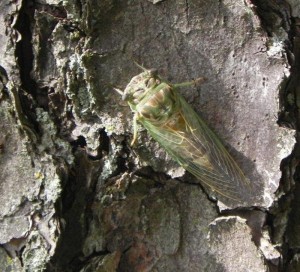 Photo of a cicada by Al Batt.

The wasp looked threatening, but preys only on cicadas and was little threat to anything else. The cute shrew was like a tiny grizzly bear, terrorizing its small world. Looks are no way to judge things.

I paused while mowing the grass because my lawn was crawling with small toads. There were so many, I thought about the old tales of skies raining toads. The American toad is the most common toad in Minnesota. If you see a toad, it is likely of that species. I love the musical trill of the male toads in the spring. The ones that lived near me were obviously thriving. What were they doing on my lawn? Toads spend most of their lives on dry land. They forage for insects, slugs and earthworms at night and hide in a nook or cranny during the day. Female toads can lay more than a thousand eggs that normally hatch within a week. The black tadpoles feed along the edge of shallow wetlands and emerge as tiny toads in approximately six weeks. Though these toads sometimes have warts, a person cannot get warts by handling toads. It’s no secret that I look for reasons not to mow, but this was a good one.

“How many lakes are in Minnesota?” The DNR says there are 11,842 named lakes over 10 acres in size. Other sources claim as many as 15,291. That includes lakes that are unnamed and may vary from the DNR definition of a lake — an area of open, relatively deep water large enough to produce waves.

Danny Steele, of Alden, told me he was checking his soybeans for aphids when he noticed 13 turkey vultures circling overhead. Danny picked up the pace.

“Do unto those downstream as you would have those upstream do unto you.”— Wendell Berry

“Courage does not always roar. Sometimes, it is the quiet voice at the end of the day saying, ‘I will try again tomorrow.’” — Mary Anne Radmacher