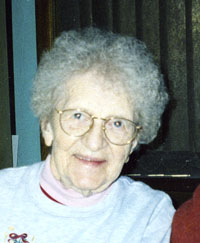 Margaret was born on Dec. 19, 1912, in Minneapolis, the daughter of William and Laura (Bettner) Groteke. She married Richard Henry on June 26, 1935, in Silver Lake, Iowa. Margaret was a member of First Lutheran church in Albert Lea, where she was active in Mission Circle. She moved to Longmont in April 1999. Margaret enjoyed crocheting and fishing. She was preceded in death by her parents, her husband in 1996; her son, Gene A. Henry in 2001; her daughter-in-law Sally Henry in 1999; her sister Mildred Ortyl in 2000 and a grandson, Kelly Flanagan in 1981. Margaret is survived by her daughter, Pat Flanagan (Richard); three grandchildren, Tracy Hunt (Peter), Kris Larsen and Mike Henry (Judy); her great-granddaughter, Shannon and many other great-grandchildren and great-great-grandchildren in Waite Park and Utah.

Inurnment at Hillcrest Memorial Gardens in Albert Lea. Cremation at Ahlberg Funeral Chapel and Crematory. Memorial contributions may be made to the Juvenile Diabetes Research Foundation.