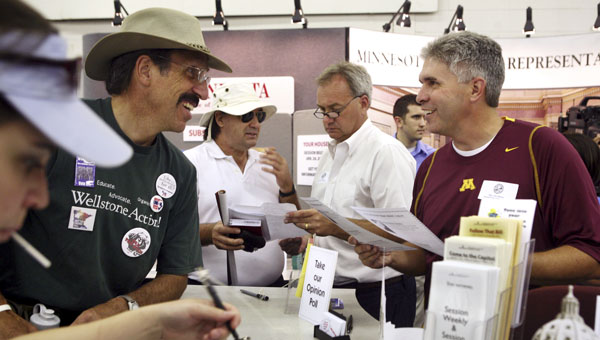 From left, fairgoers including Paul Mandell of Inver Grove Heights and Larry Converse of Spring Valley chat with Reps. Rick Hansen, DFL-South St. Paul, and Joe Atkins, DFL-Inver Grove Heights, at the House of Representatives State Fair booth in Falcon Heights on Wednesday. The House members were asking the public to fill out a poll that included questions about everything from same-sex marriage to sales taxes. -- Jeffrey Thompson/MPR Photo

FALCON HEIGHTS — The Minnesota State Fair always features a buffet of politics, and this year fairgoers have a new issue to chew on: a constitutional vote on marriage.

Voters will decide in November of 2012 whether Minnesota should add a constitutional amendment that would prohibit same-sex marriage.

There’s still one more state fair before the 2012 elections, but proponents and opponents of the amendment are both preparing to battle for votes – and the fairgrounds is the site of an early skirmish.

At the House of Representatives booth inside the Education Building, lawmakers from both parties take turns fielding questions. Fair-goers can fill out a sample ballot on 12 hot-button political issues.