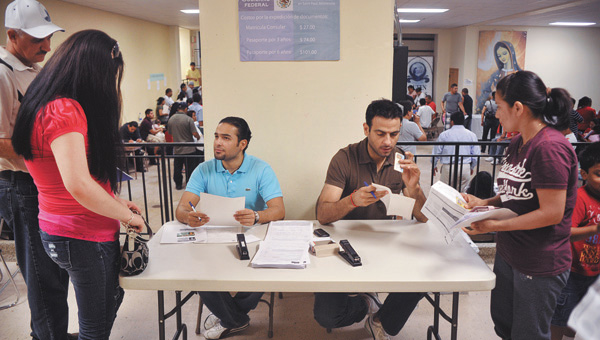 The Mexican consulate dropped by Queen of Angels Catholic Church in Austin to help residents and others in need. At least 100 people showed up by 9 a.m. to obtain their matricula consular (their Mexican ID) or get their Mexican passports, which is vital if residents want to visit relatives in Mexico.

“It’s really good for the Mexican government to support people here,” said Elda Contreras, administrative officer and part of the diplomatic staff at the Mexican consulate in St. Paul. Ana Luisa Fajer, the Mexican consul of St. Paul, was scheduled to be in Austin as well to help, but she was unable to attend due to a family emergency. The consulate usually tries to come to Austin or nearby about once a year, since there is a large population of Mexican descent living here.

Lilia Garcia went to Queen of Angels Saturday to get her matricula consular. She had lost hers and couldn’t return to Mexico without it, as she’d be turned away.

Diana Ramirez can sympathize. She graduated from Austin High School in May and will attend Riverland Community College this fall, where she eventually hopes to go into cosmetology and one day own her own restaurant. She couldn’t go visit relatives in Mexico if she didn’t have her matricula consular.

People from as far as Iowa and Wisconsin came to get their documents in order, as well as take advantage of all the organizations present to give advice and offer information.

In addition, representatives from the Immigration Law Center of Minnesota and the state’s Department Human Rights Department were present to discuss labor rights with people, as the Mexican consulate is wrapping up its Labor Rights Week.

“This is a good, good opportunity,” said Mario Hernandez, legislative liaison for the DHR.

Though the consulate was here for a short time, local leaders and organizers say their continued presence is a blessing for residents here.

“It’s neat for all these people to be gathered here,” said Dora Martinez, advocacy program coordinator at the Welcome Center.