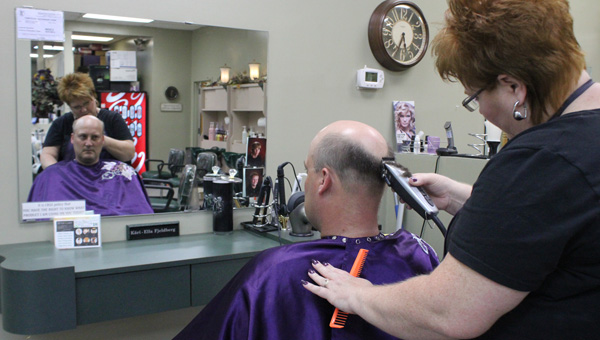 Albert Lea is soon to become an official Yellow Ribbon Community, and some local businesses are showing their support of military members and their families through discounts and offers.

One is Classic Reflections Salon & Spa, owned by Kari-Ella Fjeldberg. She heard from the Albert Lea-Freeborn County Chamber of Commerce asking businesses if they offered discounts to military personnel that could be advertised on the Beyond the Yellow Ribbon page on Facebook.

“I’ve always wanted to do it and I don’t know why I didn’t do it before,” Fjeldberg said.

Fjeldberg said she’s had family members who were in the military so it was important to her to make the discounts available for current and retired servicemen and families as well.

“This is my way of saying thank you as a business owner,” Fjeldberg said.

The salon offers a 10 percent discount on all services as well as 20 percent off most massage and tanning packages. One person who recently visited the salon was Lance Luoma, a retired technical sergeant with the U.S Air Force.

“I think there should be more military discounts available,” Luoma said.

He said when living on a military base there are discounts at the businesses surrounding the base, which are appreciated. A variety of businesses have informed J.D. Carlson, the developer of the Beyond the Yellow Ribbon Facebook page, of discounts including Don Savelkoul.

Savelkoul, of Peterson, Savelkoul & Benda in Albert Lea, said his office will perform basic will preparations at a third of the cost to military families. He said a young family could spend around $600 on will preparation, and the discount would bring that to a lower price of $200.

“The military families make huge sacrifices for our country, and we believe that we owe it to them to do a small part in helping them out,” Savelkoul said.

He said often young couples will put off preparing a will, and that military families especially should have a will in place because of potential risks.

“People don’t think about the importance of having plans in place for the children and who will handle things if they are no longer able to do so,” Savelkoul said.

Other businesses in town include the Albert Lea Family Y and Anytime Fitness. The Y offers a special to family members of servicemen who are deployed. Michelle Baseman, office manager at the Y, said they have about 10 families signed up for the program.

“I think it’s a nice benefit we offer to the military families,” Baseman said.

Anytime Fitness in Albert Lea was one of the first businesses to let the chamber know of its military discount that includes no enrollment fee and a discounted monthly rate. Northbridge Mall in Albert Lea will also soon hold a military appreciation day later in September. Val Otterson, the mall’s marketing director, said the mall will host the appreciation day on Sept. 29. There will be information available for military families on where to find services such as daycare in the area. There will also be discounts at many of the stores in the mall for military families and activities for children.

Otterson said the mall is also starting a display of photos of deployed service personnel in the mall. Photos can be dropped off at the mall and will be hung in the former Convention & Visitors Bureau window.

Other local discounts include 10 percent off products at Home Solutions Midwest, 10 percent off food orders at Trail’s Travel Center and 10 percent off rooms at Knights Inn in Albert Lea and Holiday Inn Express in Northwood, Iowa. Carlson said he’ll post business discounts on the Beyond the Yellow Ribbon Facebook page and often link a company’s website.

Albert Lea will become an official Yellow Ribbon Community at a ceremony on Wednesday afternoon at the Rochester Art Center. Look to the Tribune Thursday for a story.

Have a military discount?

Contact Sue Axesmith at the Albert Lea-Freeborn County Chamber of Commerce at 373-3938 or visit the chamber office in the Northbridge Mall.