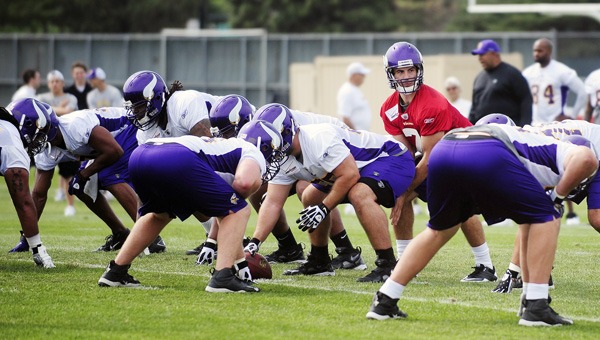 His offensive line is all but begging for more playing time to allow the unit to master a new offense and get acquainted with a new left tackle. Timing is a huge part of success for them, and they need all the game work they can get together after being locked out all summer.

But Frazier doesn’t want to play his starters too much in the preseason and expose them to injury risks before the real games.

“You’re trying to get the time, you’re trying to get the cohesiveness that you want on your offensive line as well as the rest of your team, but you also know that you’ve got to have the right people on the field when you line up on September 11,” Frazier said on Thursday. “You try to get them to work and you try to have the types of practices that you want but you do have to be conscious of what’s ahead.”

The starting unit played sparingly in the preseason opener against Tennessee last weekend. The first offense moved the ball reasonably well, but didn’t score. That sluggish start was expected in the first game of a brand new system.

“The thing about offensive line is you get a feel for the game,” left guard Steve Hutchinson said. “You get to establish your will. As an offensive line, you want to be able to establish the run, knock a little bit of the sting out of the defense. In eight or 10 plays, it’s hard to do that.

“So every week now in the preseason we’ll get a little bit more and maybe we can establish a tempo and get more of a rhythm.” 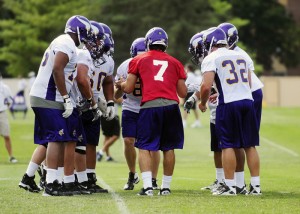 As most will say, success starts up front. The offensive line struggled mightily during last season’s 6-10 disappointment, with right guard Anthony Herrera being knocked out because of injuries to his left knee and triceps, center John Sullivan struggling with nagging injuries and the death of his father in training camp, and Hutchinson not his usual dominating self.

The results were ugly, with Brett Favre getting pummeled on a game-by-game basis and Adrian Peterson finding little room to run.

Frazier brought in a new offensive line coach, Jeff Davidson, to install a more aggressive, straight-forward blocking system than the zone scheme that was used in previous years.

Of course it all takes time to implement, time the Vikings didn’t have in the offseason. So they are trying to compress three months of workouts into about a month of training camp and the preseason.

“The coaches have done a great job of going out and putting us in positions where we’re not doing too much thinking,” Sullivan said. “But at the same time, you need to rep that stuff a lot in order for it to really just flow.”

And when it comes down to it, the Vikings still aren’t sure exactly what the offensive line will look like when they open the regular season in San Diego.

Herrera returned to practice sparingly this week for the first time since getting injured in November. He will not play Saturday at Seattle and it still isn’t clear if he will be ready for the season opener.

Veteran Ryan Cook and second-year man Chris DeGeare are vying for the starting job on Saturday and, possibly, for the regular season.

“I’m hoping next week we have a better handle, but I don’t know if that will be for certain because we are still taking a hard look at the (right) guard position. We just have to see how that unfolds,” Frazier said. “You would like to be able to say in that third preseason game that this is our starting unit, but that may not be the case.”

The starters are expected to play at least a quarter on Saturday, and Musgrave expects to hear some lobbying from the big guys up front for even more than that.

“The offensive line is a lot about cohesiveness and knowing where your help is in protection,” Musgrave said. “It’s a lot like playing basketball defense. You want to force your guy to the baseline or know he can’t go to his left.

“A lot of that has to do with offensive line play, as well, so the more those guys have time on task together, the more they will compete at a high level collectively.”