Motivated to give life 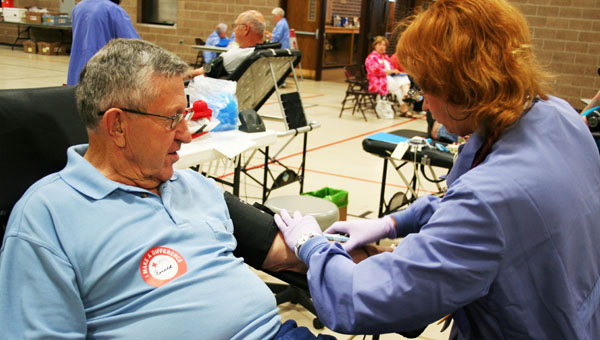 Sisters Katie and Kristine Kirsch were motivated to donate blood Wednesday because they have known someone who desperately needed blood.

“My dad passed away in December,” said Kristine. “When he was in the hospital, he needed a lot of transfusions, and thanks to the people who donate, he was able to hold on longer. I feel obligated to give back as a way to thank all those people who were able to help my dad through donating.”

The American Red Cross Bloodmobile held a blood drive Wednesday at the National Guard Armory from noon to 6 p.m. The Bloodmobile will be set up 1-7 p.m. today and 9 a.m.-2 p.m. Friday. The drive is sponsored by Keebler Cookies.

“We need as many people who can donate to come, especially Thursday and Friday,” said Jan Birkhofer, a board member for the Freeborn County chapter of the American Red Cross and blood services volunteer coordinator.

Wednesday’s donation goal was 59 units, the goals for Thursday and Friday are 50 and 59, respectively.

“It’s rewarding to see the number of people who give blood so that those in need have it,” said Lois Anderson, an American Red Cross volunteer. “And you feel so much better after giving blood. I am unable to give blood, so my donation is to give my time.”

For those interested in donating blood, the process isn’t complicated. The first step is registration. Bring a photo ID and, for donors under the age of 17, a signed parental consent form. Next, a volunteer will review your health history and do a short physical including checking your temperature, blood pressure, pulse and blood count. The actual donation usually doesn’t take more than 10 minutes. After donating, you should spend about 15 minutes recovering and enjoying refreshments.

“I’ve seen a lot of people who need blood, and I figured if I can help out, I’ll do what I can,” said 78-year-old donor Gerald Dunford.

Many people are moved by personal experiences to donate; however, that is not the only reason, as demonstrated by Sue Bowman.

“It’s what I’ve been doing for years,” Bowman said. “It doesn’t take much time, it doesn’t cost anything and it makes me feel like I’ve contributed something.”

Statistics show that every two seconds someone in America needs blood. However, 8 percent, a fraction of the 38 percent of the population eligible, actually donate blood. According to the American Red Cross, it is important to donate because there is always a need. Many donors, both first-timers and regulars, seem to agree with the statement: The gratification is instant.

This comes from the American Red Cross saying: “The need is constant. The gratification is instant. Give blood.”