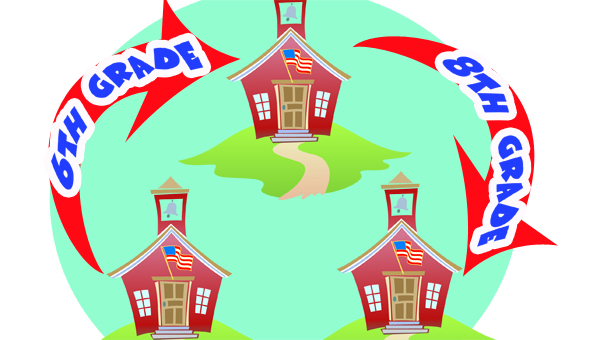 Albert Lea Area Schools have been making changes that are all about to come together on the first day of school in a few weeks.

He said moving teachers to other buildings will be an opportunity to give them a fresh start, at a time when many schools are struggling to make ever-increasing adequate yearly progress goals — often nicknamed AYP.

“Each year we don’t make AYP, we get more sanctions,” Funk said.

Another change at the start of the academic year will be to make the alternative teacher pay program, Q-Comp, district-led and teacher-driven, where previously it was teacher-led. Building principals will work with Q-Comp building coordinators on staff development. Funk had brought this issue to the school board in March, and the board agreed changes might need to be made if student achievement wasn’t increasing.

The district will begin a program for students who are “gifted and talented.” The program will be led by teacher Sonya Zieske, and Funk said the district wants to make sure to provide for high-end learners as well as students who struggle.

There’s more. Funk said the district is moving forward with online instruction, with help from new wireless Internet installed in each school. With it, teachers are learning a new computer management program that tracks grades and attendance that replaces a system from the 1980s.

• The Albert Lea Bus Company has a fleet of new buses.

• The district has new a food service management company.

• Schools are getting upgrades for energy efficiency and heating and ventilation, a project that will continue for the next three years.

“We’re doing a lot of change, but the one thing that hasn’t changed is the people, and that’s why this change will be successful,” Funk said. “Change is good.”

The sheer amount of changes have some parents worried, as evidenced by more parents coming to school board meetings. One such parent is Kari Ulrich, who has two sons in the district.

“I am really nervous about all the transitions going on,” Ulrich said. “Some change is good, but too much change is very disruptive.”

Ulrich said she didn’t think the public was very involved in the decision-making process for many of the changes and that she’d like to see more communication between the public and the school board.

Albert Lea High School Principal Al Root said the school is prepared to have eighth-graders at the high school. Over the summer and since the realignment measure was approved last fall, high school staff have been preparing for the change.

The school has also used a “house concept” that will keep eighth- and ninth-graders in the lower E Wing of the school and upperclassmen in the upper E Wing for all core classes. Students will still be co-mingling on the way to electives like science, art, industrial tech and music classes.

There will be three lunch periods, one for eighth- and ninth-graders and two for all upperclassmen. Root said the school held around 900 students in the 2010-11 school year, and in the upcoming school year it will hold about 1,130 students. Staff will increase by about 15 to 18 teachers as well. Root said he’s excited about having a daily 15-minute advisory period.

“I think it’s going to be exciting,” Root said. “Eighth-grade will offer a freshness to the building.”

Root has previously been a principal at a high school that was seventh- through 12th-grade, so he said he doesn’t think it will be a challenge. To help incoming eighth- and ninth-graders will be the Link Crew, a group of upperclassmen who help new students with the transition.

Another change Root hopes to implement will be how students are dropped off and picked up at the school. He said there have been traffic issues when parents come to the main entrance of the school off Hammer Road. He’d prefer students be brought and picked up from the entrance outside the commons.

Not only will Southwest see two grades of students who have never been to the school before, it will also have a new principal. Jean Jordan will be heading the middle school after its former principal, Marsha Langseth, was moved to the high school to be an assistant principal and to help with the transition of eighth-graders to the high school. Jordan said she’s looking forward to starting the school year.

She said she thinks sixth- and seventh-graders will work well together. Teachers are settling in their new classrooms and preparing for the start of the school year. Some teachers are new to the school having taught sixth-grade in elementaries, and Southwest has lost teachers to the high school who will teach eighth-grade.

“We have some really competent people coming up,” Jordan said.

Jordan taught middle-school-age students before becoming Lakeview Elementary School’s principal and said she thinks sixth-graders are ready for a change and to be out of elementary schools.

Teachers will have a common prep time to help plan lessons and build teams. Students will also have an advisory period each day. Jordan said some teachers have been trained in Developmental Designs, which is the junior high version of Responsive Classrooms. She said she had a lot of success with the program in the elementary school and is excited to be using the program.

“I’m very excited and just ready for the first day of school,” Jordan said. “After we did the presentation in April to the parents I feel a lot of anxiety went down.”

She said she understands if there is still apprehension but that she’s had mostly positive responses from parents. She hopes the middle school will be a place for students to gain maturity before heading to the high school.

Not only will all the elementary schools in the district, Sibley, Lakeview, Hawthorne and Halverson, lose an entire grade of students, most have fairly new principals. Halverson will again be led by Matt Esterby, who will be in his second year. Lakeview will see Eric Hudspith as its new leader, who recently was the district’s facilities and transportation director. Hawthorne will see a new principal in Karen Zwolenski who was hired from outside the district when former principal Corrine Tims retired. The only veteran principal is Ross Williams of Sibley.

“Change is always going to be what you make of it,” Williams said. “Everybody I know and work with is excited to start the year and work with kids — that’s what we’re here about.”

He said he’s excited to have more space in the school, which was the main reason for the realignment. He no longer has to have art classes in the cafeteria, and other teachers will have more space for programs.

“We have a little more room to work with kids and not have to feel like we’re on top of each other,” Williams said.

He said he’s not concerned about the movement of staff between buildings because every teacher’s main focus should be educating children.

“I think it sets itself up for us to do a better job in working together collaboratively for the success of students,” Williams said.

He said the district is hiring new teachers each year to take over retirements, which is no different than teachers moving buildings because there will always be questions and a need to work together.

“I think people shouldn’t be concerned about that as much because the focus is kids — that is why we’re here,” Williams said.