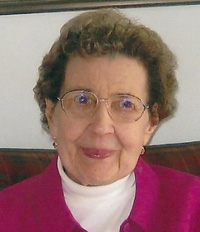 She was born on Jan. 14, 1924, in Duluth, the daughter of Gust and Hilja Maria (Kiviniemi) Nikula. She graduated from McGregor High School in 1942 and worked at the Kiser Shipyards in California.

On June 30, 1945, she married Roy Wichmann in California. The couple resided in Berkeley for several months before moving to Albert Lea. In 1950 they moved to Battle Lake. Roy and Norma owned Wichmann’s Grocery Store “Fairway Foods” for 37 years. In 2000 the couple retired and moved to Fergus Falls.

Norma was a member of First Lutheran Church and is a life member of the VFW Auxiliary, all of Battle Lake.

Preceding her in death were her parents, Gust and Hilja; her husband, Roy; a sister, Ringa Lehtinen; two brothers: Eugene and Rudolph Nikula.

Survivors include a daughter, Gail Daniel and a grandson, Eric Daniel of Bloomington along with numerous nieces, nephews, cousins and a host of friends.