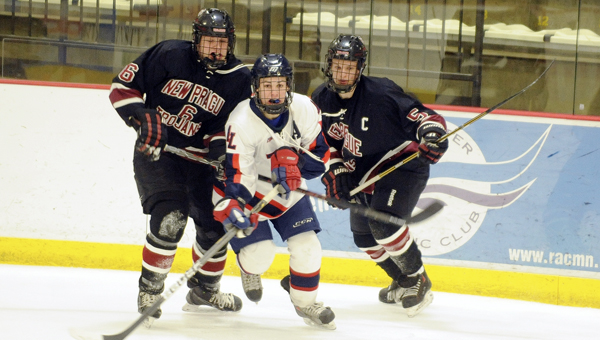 After dedicating three years to the Albert Lea boys’ hockey team, Eric Carlson isn’t coming back for a fourth.

“I give him my blessing,” Nystrom said.

Carlson, 17, one of the state’s top scorers last season, has decided to forgo his senior year at Albert Lea High School to play junior hockey in Fairbanks, Alaska.

Carlson called the decision tough but necessary for his hockey career.

“For hockey development, it will be great for me,” Carlson said. “Leaving the town I grew up in and all my buddies is kind of a factor you have to deal with. The hockey part of it overrides it.”

Carlson was a three-year letterwinner for the Tigers hockey team. He finished last season with career-highs in points (66), goals (39) and assists (27), and finished tied for 13th in the state in points and fifth in scoring. Carlson was named an Associated Press All-State Honorable Mention after leading the Tigers to a Big Nine Conference championship.

Now Carlson will take his talents to Fairbanks where he’ll play for the Ice Dogs, a Junior A Tier II team in the North American Hockey League.

Carlson said he began trying out for junior hockey teams last summer for the experience but knew he had a legitimate shot at making a team this year. He tried out for the Ice Dogs in Prior Lake and was told he made the team in mid-July during an exit interview.

When Carlson was given the good news, his mind was already made up. Carlson said he and his family had already decided if he made the team he would go.

“Throughout the tryouts, (coaches) asked me ‘If you got the opportunity to leave high school,’ would I,” Carlson said. “I was thinking about it throughout tryouts, and when asked if I had the decision made I told them ‘Yeah,’ my decision was I’m going.”

Carlson said that at the end of last season, coach Nystrom told him he had his blessing for whatever he decides to do.

“He was great for me all my years of high school hockey,” Carlson said of Nystrom. “He was more than glad I made the team.”

Nystrom said Carlson provided Albert Lea fans with many exciting moments over the past three years and that he would have been a captain this season.

“He never missed a practice,” Nystrom said. “He always worked hard and provided a lot of leadership, too.

“Carlson has always given us 100 percent. I’m sure the decision was not an easy one but was a situation where this is what he wants to do and I wish him all the luck in the world.”

Carlson understands the risks involved with a junior hockey program. While he’s on the roster now, he could be traded to another team or cut. Still, Carlson is excited to get started.

“It’s going to be an amazing opportunity,” Carlson said. “I’m looking forward to the experience and all the fun stuff that’s going to come with it.”

Carlson’s winning attitude will be a natural fit with the Ice Dogs. The team finished 45-15-3 last season and won the NAHL Junior A Tier II national championship.

Carlson said he plans on taking online courses during the school year to work toward his high school diploma. He also hopes he can return to Albert Lea to graduate from the school he spent three years at. Carlson has a host family in place and leaves for Fairbanks on Aug. 24.

Meanwhile, Nystrom hasn’t begun thinking about next season without his top goal scorer.

“I haven’t come up with a plan on how we’re going to attack,” Nystrom said. “I know a lot of kids realize Carlson is a big offensive threat. Guys will have to take it upon themselves and kick it up a notch.”

Carlson said he plans on following his teammates this winter and expects them to work hard with whatever situation they’re given.

“Albert Lea will still have a pretty good hockey team,” Carlson said. “As long as they go out and work hard I think they’ll be fine.”

While Carlson is leaving the contiguous United States, it won’t be long before he’s playing hockey back in Minnesota. The Ice Dogs play in the NAHL Showcase Tournament on Sept. 14-17 in Blaine.